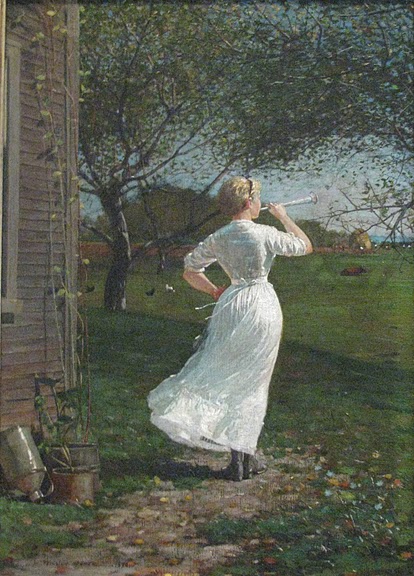 So… if you’re an American given to the delicious delight of Thanksgiving, or even a non-American adopting the concept and cookings of this festive winter-time feast, then today will be a lot of talking about turkey. Or battling with Brussels sprouts. Or mulling over precisely how many mini-marshmallows to plant atop the sweet potato mash (there are those who appreciate precision, you know). Even though this year I’m sidestepping the considerable responsibility of putting on my own culinary show, I’m able to help those in more sticky predicaments. Apparently you can call a 1-800 holiday help-line if it’s getting hairy. And it’s not too late to get the new In the Kitchen app from the Food Network, with 45,000 recipes from their sizable stable of chefs as well as seasonal menus and life-saving suggestions.

So that’s that sorted, but we’ve yet to consider that other heinous hurdle that happens every time big groups of people gather to gorge on a massive meal: how on earth to get them all to the table on time, once the hot-hob slaving is done and while the food is still at least luke warm? Here to offer a stylish solution is a lovely lady from Winslow Homer. 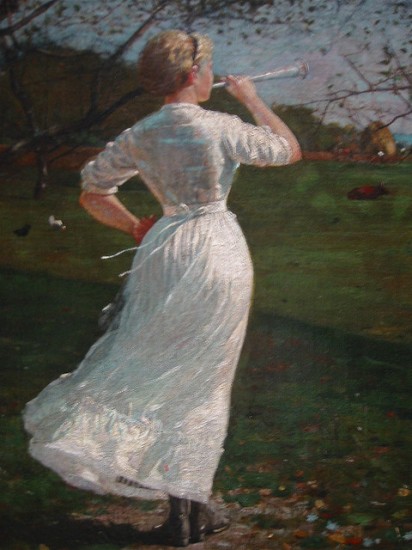 Now obviously the weather in The Dinner Horn (1870) is a bit off-touch (unless you’re celebrating Turkey Day in Australia that is), but I could not resist this breeze-blown breath of fresh air, packed with the promise of an imminent feed. Homer makes me feel good, with his homespun paintings of America at its best: wholesome, industrious, colorful and hopeful. Homer (1836 – 1910) was a leading artist of his generation, often sealing into his pictures a passion for nature that reflected this country’s pioneering spirit in the 19th century.

While it was a stint in France that gave him his first fine-art foray (he came to art late after starting out as a commercial printmaker), Homer quickly staked out a style that didn’t look much like anyone else. The Dinner Horn shows us how he constructs forms rather solidly – with nice clear outlines – and then fills them in with saturated color and bright light.

Here he sets out a lovely little balance between a brown building and path to the left and green reaches on the right. The white dress is stark and striking as the central motif, echoed ever so lightly in the pale blue sky. Homer loved above all to paint the power struggle he perceived between man and nature: while his Horn doesn’t do that exactly, it does toot beautifully about the small but significant strife of getting people to sit down, serve themselves and start. 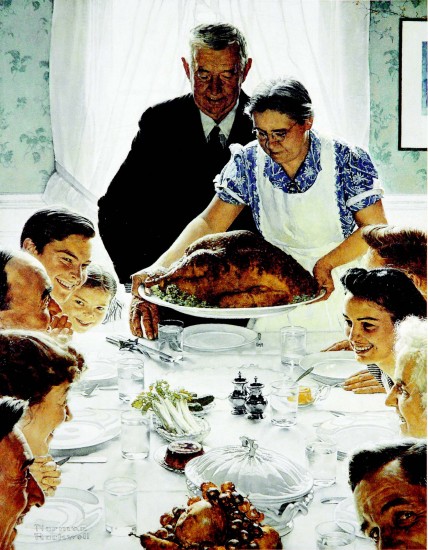