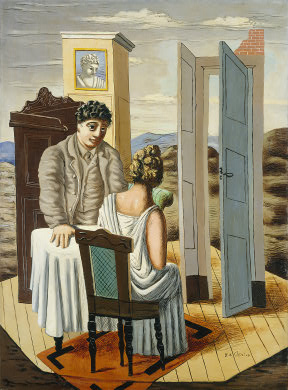 Consider – if you will – the following:

1. You are offered a brain pill that will make you 10% more intelligent, but you will seem 20%  less intelligent to everyone else. Do you take this pill?

2. You have won a prize, which has two options, of which you can choose either (but not both). The first option is a year in Europe with a monthly stipend of $2,000. The second is 10 minutes on the moon. Which do you choose?

3. You wake up inhabiting Bruce Springsteen’s body. Your voice sounds just like his, but your musical ability is still entirely your own. You are scheduled to perform in a huge concert that night. What do you do? 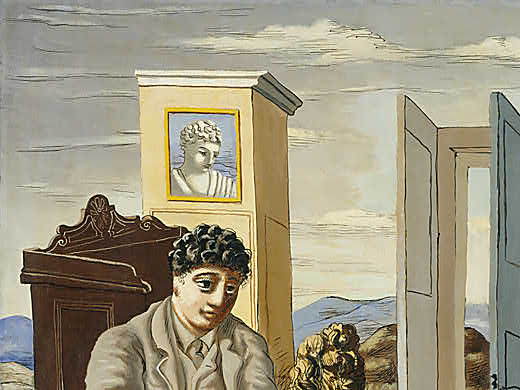 These are just three of the brain-straining quizzicals posed by a strangely addictive game given to Husband by his (triplet!) sister. It’s a deck of the most delirious cards: on each is printed an extreme scenario with a follow-up question that probes the inner workings of personality and personal taste and conscience. “Prepare yourself for some insane conversations” yells the lettering on the back of Chuck Klosterman’s HYPERtheticals and indeed it is a jump-off point for some out-there talk. 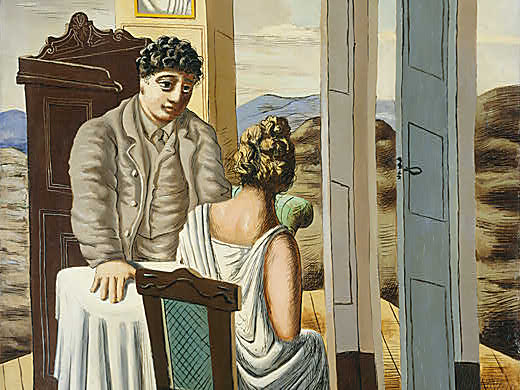 Now at the NGA I’d say the artist offering up the strangest conversations would probably be Giorgio de Chirico: just clock his Conversation among the Ruins (1927) for some fast-fix proof. Here’s a lady with her back to us, draped in Grecian garb, seated on a wooden chair at a table that looks lifted straight out of a fine dining establishment. A man stands before her, suited and booted and presumably partaking in the the eponymous chat. Beyond the curious couple, the oddness really sets in: an angled patch of wooden floor supports a strip of rug and a segment of wall. There’s a dismembered door jamb and a door jammed open and what looks like a mahogany wardrobe behind the man. This mind-blowing mise-en-scene all takes place in barren brown territory. 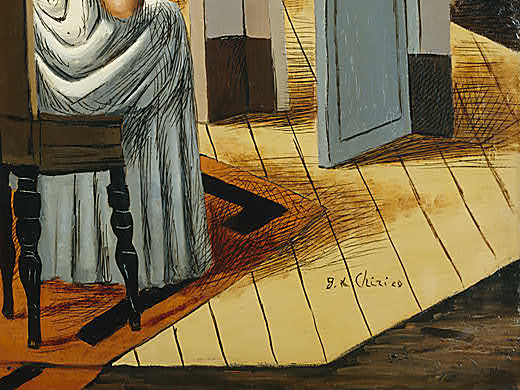 De Chirico (1888 – 1978) is best remembered for is ability to make the viewer take a fresh – and often disturbing – look at the familiar. Having been educated in Athens and Florence (he was born in Greece of Italian parents), he moved to Paris in 1911. From 1910 – 1920 he shared Surrealism’s passion for the city as an eerie and seductive labyrinth and produced lots of paintings with silhouetted figures in harshly-lit, unnervingly empty streets. 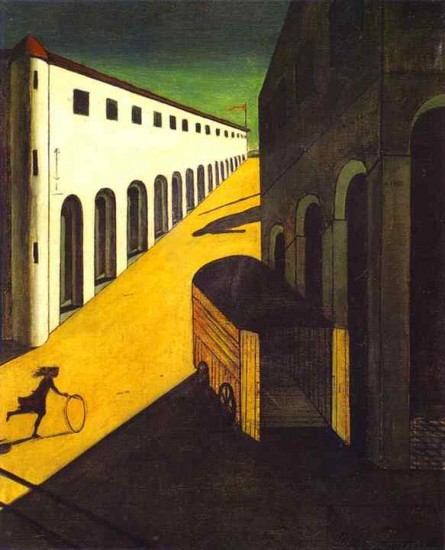 In time though, de Chirico was increasingly taken in by classical painting and began fusing his interest in ancient Greece and Rome with disjointed and disharmonious elements in his decadent pictures. So our insane conversation topic for today: what on earth does this picture mean?