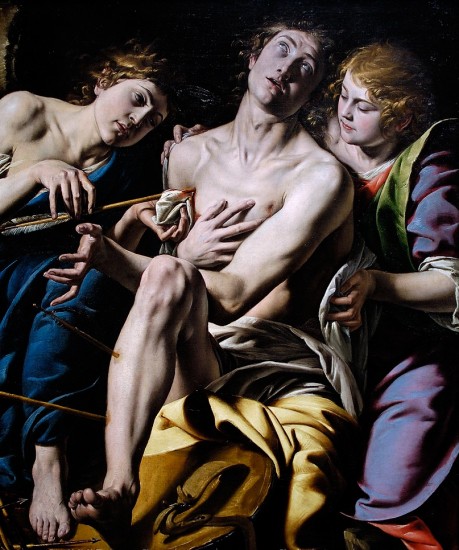 Scenes of St Sebastian are two-a-penny in art history… and if that sounds flippant, let me explain. He’s a popular subject for a few stand-out reasons: since he’s often shown shot-through with arrows (according to the manner of his martyrdom) his nakedness allows artists to let loose on anatomical know-how, slipping in sinews and skin textures and all sorts (especially so as the scientific bent of the Renaissance set in). There’s also the ancient angle: Sebastian was a Christian killed at the time of Emperor Diocletian (he died around 288), so often there’ll be a smattering of columns and some rubble of old ruins, attesting to an artist’s instruction in the arts of ancient Greece and Rome.

Sometimes I have to say I find pictures of this saint to be washed with a watered-down emotional glaze: he’d gazing upwards, cool as a cucumber (delivered from the piercing pain by his faith in God), snaking elegantly all the while. Which is why I’m bringing you this utterly-unlike-that version by Varallo on the day that the eastern orthodox church honors this saint. 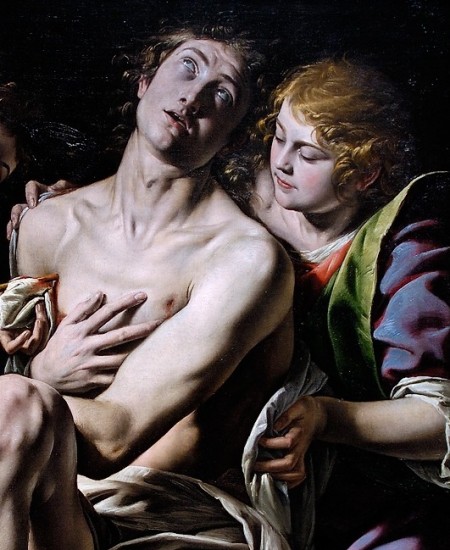 Oh just look at this shockingly lurid work, which offers none of the usual anodyne effects of a simplified and sweetened St Seb shoot-out. Instead we’ve nowhere to look but at the brutal bodily reality of the moment, far too close and far-too affecting.

The Italian Tanzio da Varallo (c. 1575 – 1633) was orphaned age 11 and received his first artistic instruction from one of his brothers, who worked in the Mannerist style of the late sixteenth century. But by 1600 Varallo had upped and left for Rome (we’re not sure how long he stayed there) which ran a deep rut of influence across his canvases. Here, I’d say we’re seeing lashings of Roman Caravaggio, what with the high-key contrasts of light and shade and the dramatic poses of the protagonists. 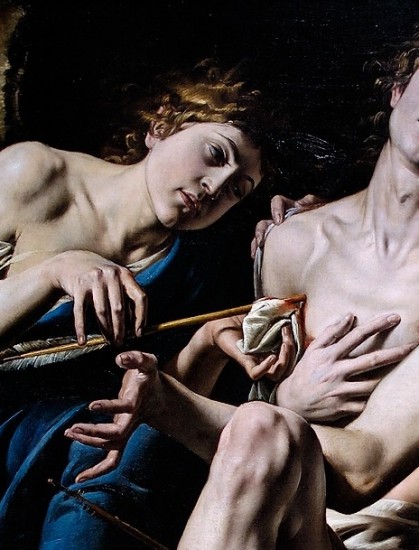 But Varallo has a visceral vim that’s all his own. See how he condenses the bodies to barrel them into the confines of the canvas, cropping them side to side. The head of the angel sways in sympathy with the saint, while the bookend body of a female figure flattens movement to the right. 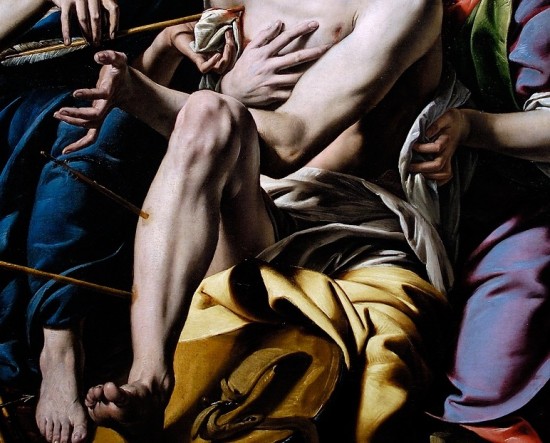 Everywhere is eddying energy, brought in by the lancing lines of the archers’ arrows, the bent and twitching bunches of fingers and the pulsating, pulling swathes of drapery. Varallo’s native village to the north of Milan was a major centre of popular piety, an inheritance that reads clear here in the realistic and expressive features of the saint. And utterly addictive are these cry-out-loud colors that create red blood and pale skin, and an emotional intensity that’s hard to ignore.