It’s a composition case study this week and Piero della Francesca (1410-92) is an excellent example of how artists use composition not only to put together a painting but also put across a message. This man is a master composer of works imbued with a sense of keep calm and carry on.

Piero was Italian (what else, with a name like that) and lived and worked most of his life in Arezzo and Borgo San Sepolcro, his birthplace. He died relatively unknown but art history has exalted his talent and vision. Though the Baptism of Christ (c.1440s) is an early work, it is already pure Piero and what a breathtaking push-the-pause button painting this is. Let’s analyse the composition using some starter questions that you could apply to any painting. 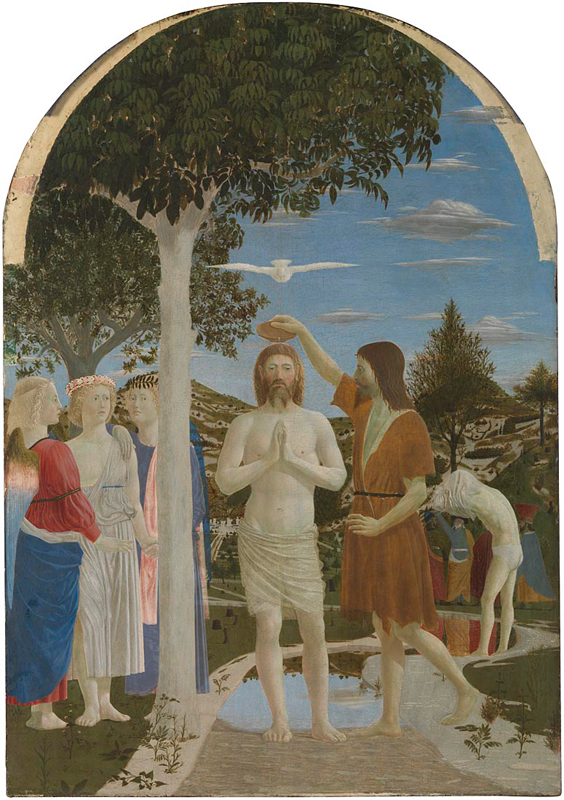 What is the format (portrait or landscape)? This is portrait format (higher than it is wide). Where is the focal point? Here it’s bang in the centre: Piero shows the moment John the Baptist poured holy water on Christ’s head. Christ is in the middle as the central axis and the obvious focus for our eyes. The action takes place in front of a hilly landscape and blue sky. Is it symmetrical or asymmetrical? Is it balanced or does it appear random? Now this is where we get to Piero’s passion. The guy couldn’t get more balanced if he tried. Take a look at this annotated version of the painting and see how he’s established a strong horizontal-vertical rhythm through the work by arranging his forms into a grid-like pattern. 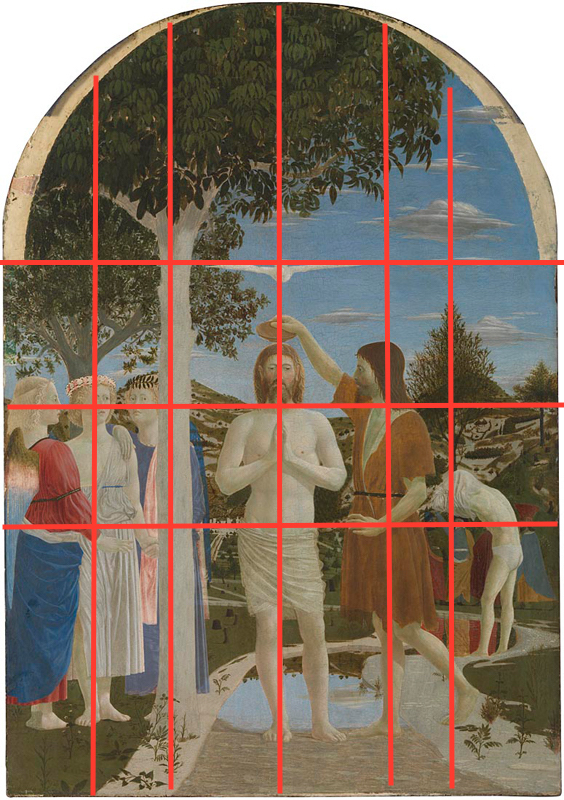 Does the composition use a certain shape? Yes, a column-like shape defines many of the forms that run vertically, emphasising the linear effect. He’s even using a traditional proportion known as the Golden Section here, which consists of a line divided into two so that the smaller part is to the larger as the larger is to the whole. In everyday language the golden section is referred to roughly as five-eighths to three-eighths. Piero applies it here vertically, down through the tree in the left foreground and horizontally, through the wings of the dove and the clouds in the upper part of the picture.

It should come as no surprise that Piero was a mathematician as well as a painter. His love of numbers helped form his style and he spent his final years publishing works on harmony and perspective. The fact that his art is so symbiotic with science means he is now seen as a central figure of the Renaissance. Happily, what prevents Piero from coming across as a boring mathematician is his feel for visual variety: he breaks up the grid system with curves to create movement so that the scene doesn’t descend into monotony. 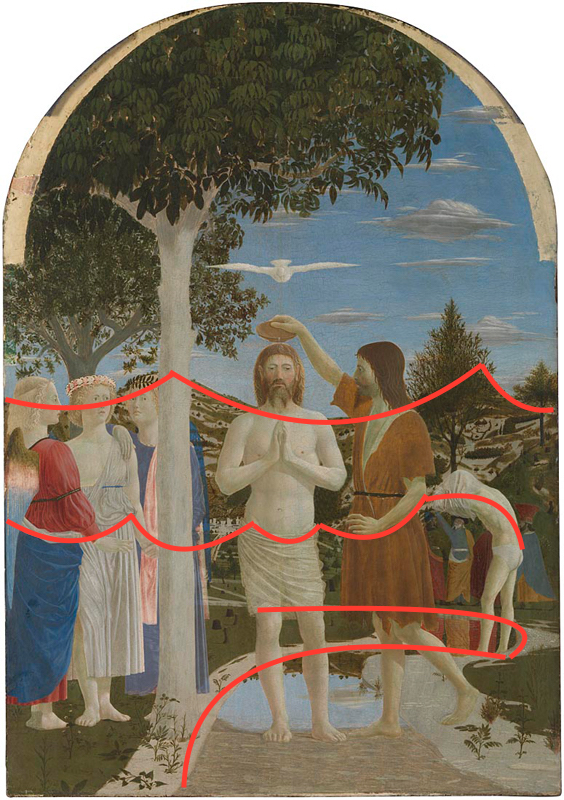 Piero is not the party painter of the Renaissance. Don’t come to him for unstructured, informal, dynamic or exciting compositions. He seems from start to finish to have wanted to create harmonious and well-balanced pictures. The clarity of his compositions and their sense of order speaks of more than just maths. This is a world away from my teenage tortures with algebra and probability. Rather I suspect Piero used mathematics in his compositions as a way of expressing deep spirituality. 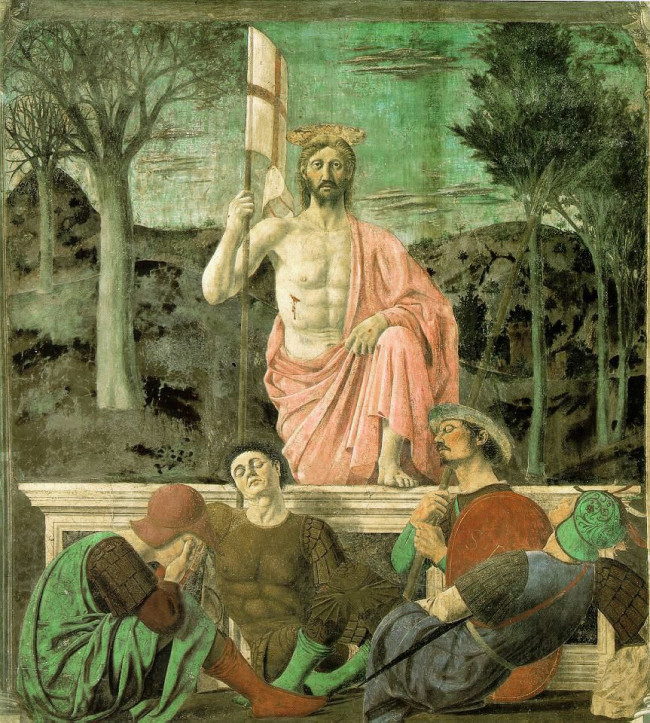 It’s almost Easter so I’ll leave you with a Piero piece de resistance, the Resurrection (c. 1463). Here The figure of Christ rises triumphant from the tomb as soldiers sleep on. Never was a triangle put to better use. 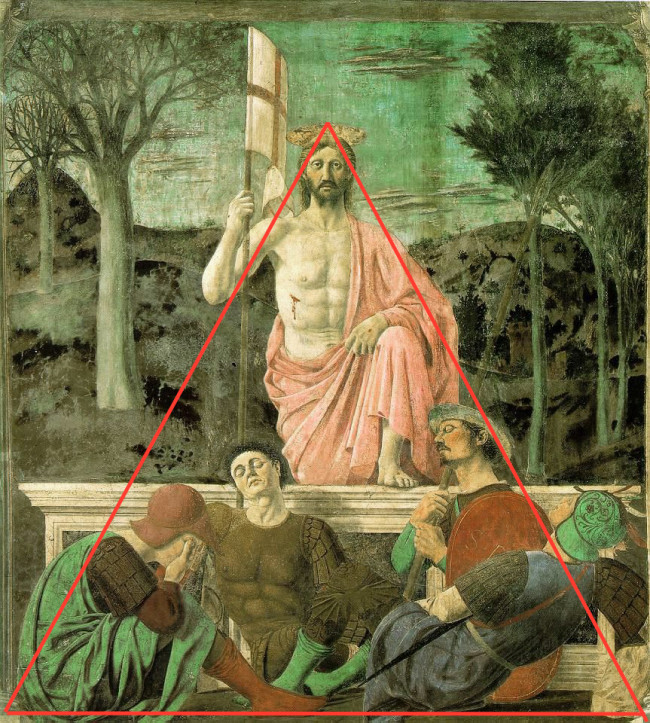 One thought on “Composition: Renaissance”