It’s wood week. Like marble, wood is carved. It’s softer though (so easier to work) and doesn’t survive as well since it can decay, be eaten by bugs or burned. As with all materials, wood has natural inherent properties that affect the way an artist works and how the work turns out.

Wood can achieve some amazing effects. For example, soft woods (such as lime) can take on really fine detail. See what I mean in this work by Tilman Riemenschneider, a German late gothic sculptor famed for his work in wood. 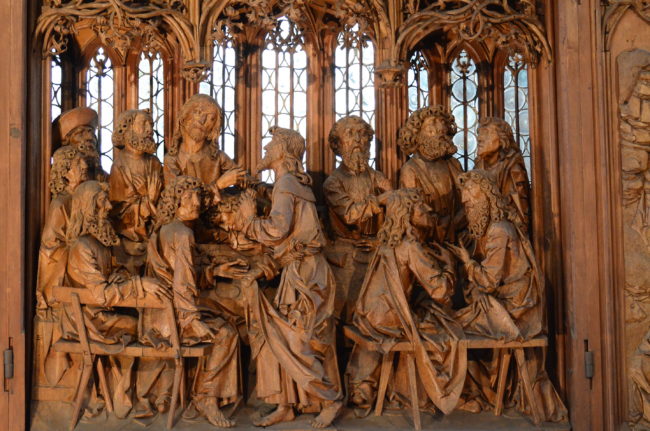 This Last Supper scene is part of his Altar of the Holy Blood (1501). The level of detail here is mind-blowing, from the drapery folds to the fingernails.

Another thing wood does well is be lightweight. This is by the Spanish Baroque sculptor Gregorio Fernández (1576-1636) who made religious subjects in wood. His most expressive sculptures such this Pietà from 1617 were designed to be carried in Holy Week processions. Since wood is light it is suitable for sculpture intended to be carried. 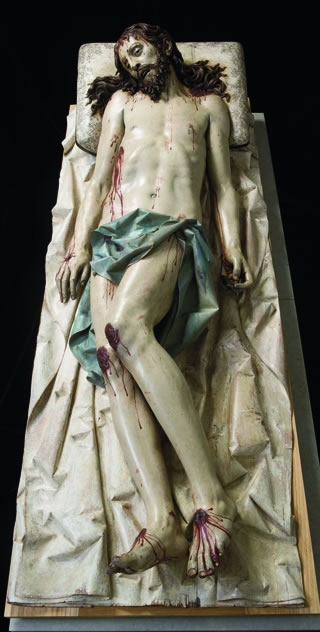 This is also by Fernández. Here wood is made to look and feel flesh-like and the paint only adds to the effect. Whereas these days sculptors tend to emphasise the natural colour and grain of wood, in earlier centuries it was common to paint carved wood sculptures. In the case of the Dead Christ the sculpture was coated in glue and white ground before the painter got to work. 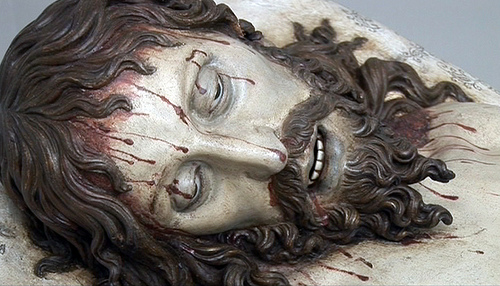 He’s got glass eyes, ivory teeth and is presented on an almost stage-like platform. It’s dramatic and theatrical. Imagine approaching this figure to pray over, touch, kiss: the wood would have made him warmer to the touch than marble ever could thus adding to the life-likeness. Or rather dead-likeness.

Wood also conjures up connections to primitive art. The great majority of African sculpture and that of Oceania and other regions is done in wood. 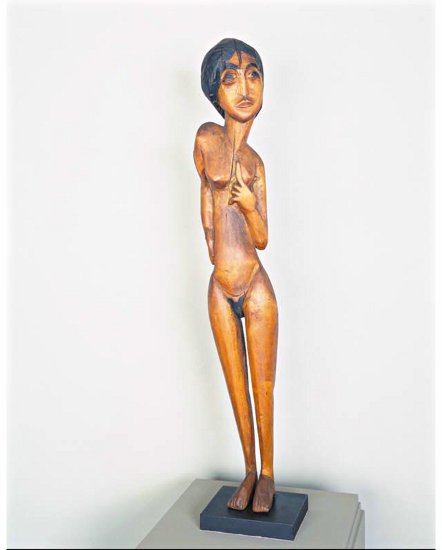 Die Brücke (The Bridge) was a group of German expressionist artists formed in Dresden in 1905. As well as Cézanne, Gauguin and van Gogh Die Brücke was fascinated by so-called “primitive” art from Africa and Oceania. This nude by Ernst Ludwig Kirchner is a western expressionist take on a primitive wood carving.

This figure with a raised arm from the early 1980s by the German Neo-Expressionist Georg Baselitz (b. 1938) also conjures up connections to the primitive. The direct carving of the figure and the primary colours can look tribal. What this figure also does is show us the wood-ness of wood, stressing the vertical of the original tree and its roughness in the surface texture. 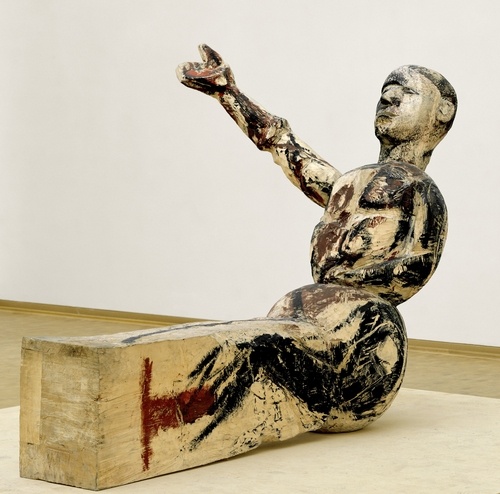 In much of his wood work Baselitz uses rough techniques to provoke emotions in the viewer. In this Model for a Sculpture (1980) he’s used axes and a chainsaw for a raw uncompromising look. The wood surface records all the cuts and slashes across the torso that seems to give the Nazi salute while rising from a block of wood. 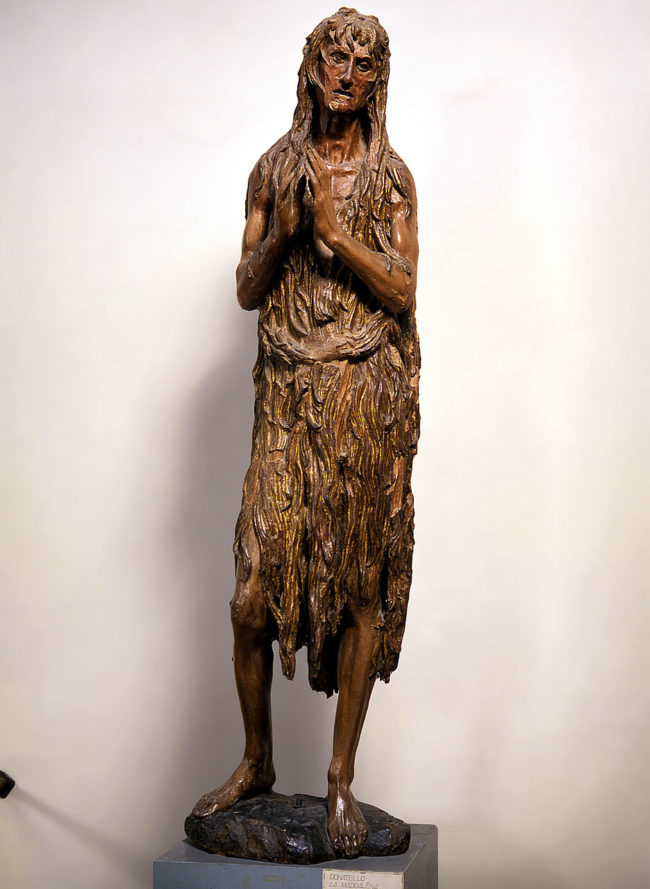 Baselitz excels at working wood into expressive figures but he certainly isn’t the first to have done so. The Florentine sculptor Donatello (c. 1386-1466) had a real feel for the suggestive power of wood, especially later in his career. His Mary Magdalen (c. 1455) is shocking: her emaciated body and hollow cheeks speak of faith and torment. The sense of her physical decay is all the more meaningful since the wood from which she is carved is itself vulnerable to decay. 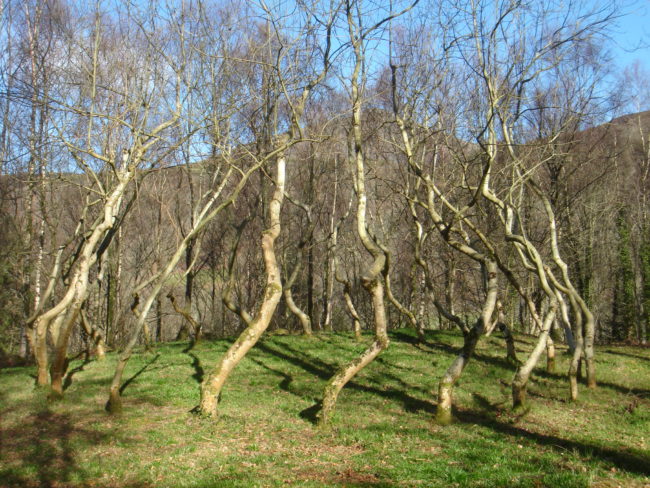 Mary Magdalen gets to the heart of why wood sculptures are special. The British sculptor David Nash (who’s worked with wood carving and live trees) puts it well:

“If someone asked what material I was using when I was first making wood sculptures, I would say ‘I am working with wood.’ This was usually just planks and beams from demolition sites. When I no longer had access to that the only available wood was fallen trees. Then I realised I was working not just with wood, but with where the wood came from – the tree.”

For his Ash Dome (pictured above) Nash planted ash saplings in a circle and trained the trunks over a period of years to grow inwards so that the foliage joins together to form a dome. The dome has an architectural feel to it and the trunks seem to dance in formation. The Ash Dome is such a beautiful patient example of the push and pull of working with wood. Even when it’s cut and then carved wood retains that sense of one-time life, breath, growth and spirit.