We’re looking at bronze as a material for sculpture this week. Bronze has been considered prestigious since ancient times and the techniques for casting it have hardly changed. We’re starting with these one-time warriors (they would have had weapons). These two life-size bearded nude bronzes were brought up from the sea off the Riace marina in southern Italy in 1972. 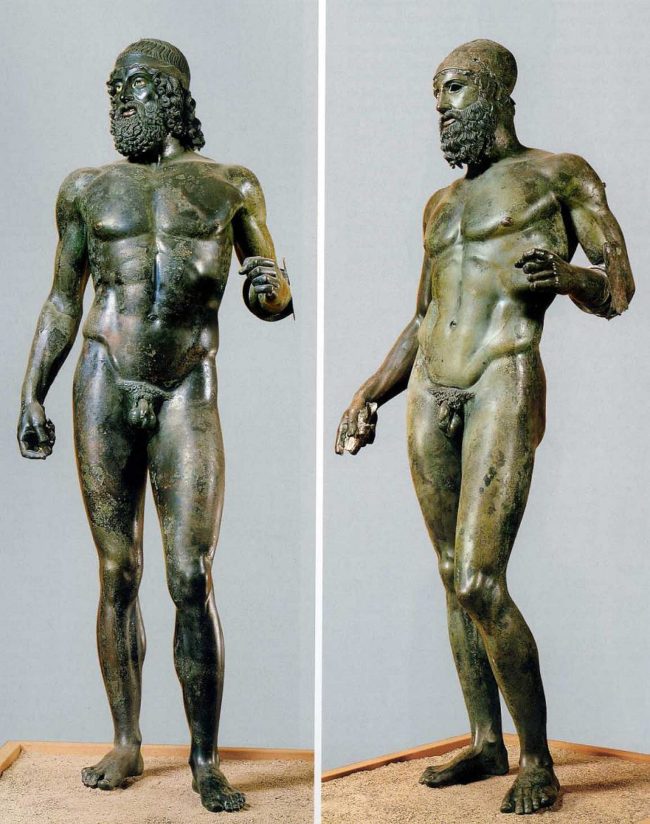 These are rare survivors since metals were costly and often melted down and recycled in antiquity (most Greek bronzes are known only in later Roman copies in marble). The Warriors are dated c. 450 BCE, a period marked by an increased interest in the use of bronze. The impact of these figures is indeed amped up by the bronze: the dark gleaming surface is striking and starts to look like oiled skin in the mediterranean sun. Add to this the intense facials: one of the men still has inlaid eyes and red copper lips revealing silver teeth. 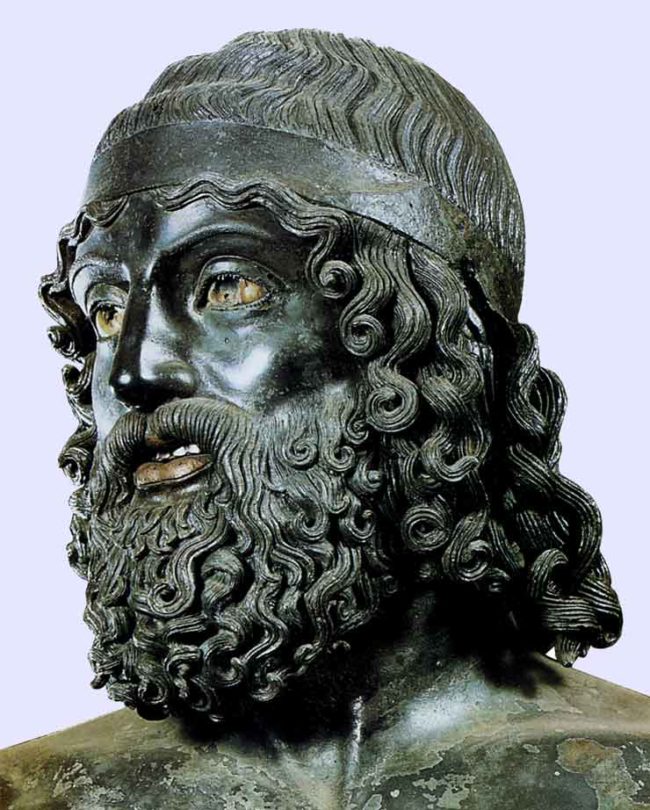 These hollow figures were cast using the lost wax method, a complex process that will have us marvelling at bronze sculpture all the more. Most sculptures made of bronze are created using this technique. 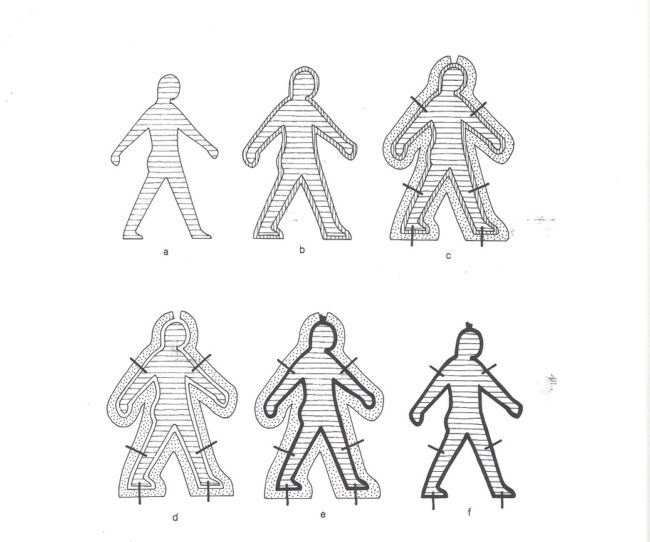 The sculptor begins by building up a model in clay (a): this part of process encourages trying things out in a way that would have been impossible for an artist working in marble. The model is then coated in a thin film of wax (b). The outer surface of this wax film shows what the finished bronze will look like. Next the sculptor encases the wax-covered model in a clay mould (c). This mould is both flexible and strong and is held in place by metal rods that run through to the clay model at the core the sculpture. Now the wax is melted out, leaving a gap between the clay model and the outer mould (d) before molten bronze is poured in to fill the space first occupied by the wax (e). Once the bronze has cooled and solidified the mould is removed and the sculpture finished off. 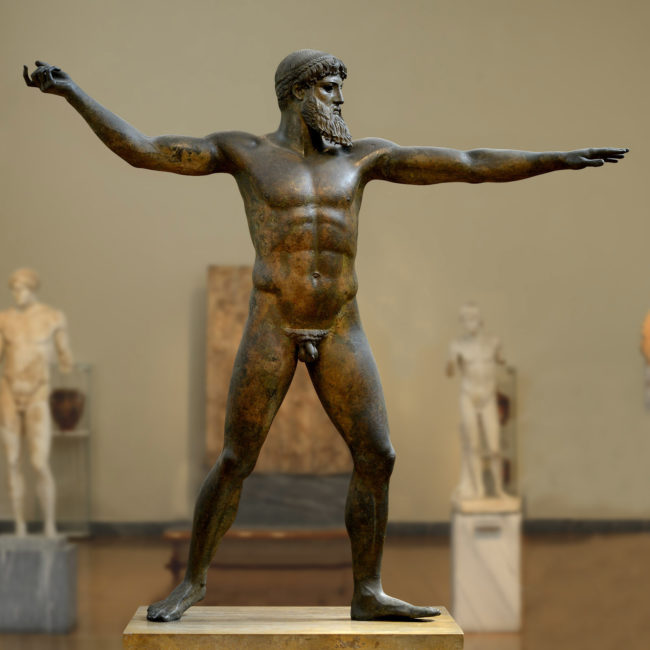 This large-scale bronze beauty was found in the sea off the cape of Artemision. Dated c. 460 BCE this god in the midst of vigorous action (he probably once held a weapon in his right hand) tells us about one of the key advantages of bronze: it’s tensile strength. Whereas marble sculptors had to be cautious about the poses they used and careful not to cut limbs too far free from the body for fear that they would break off, bronze sculptors could explore a far freer arrangement of arms and legs due to the ability of bronze to support its own weight. This Poseidon/ Zeus figure has the longest left arm of anyone I know, and it is reaching out completely unrestricted into space thanks to bronze. 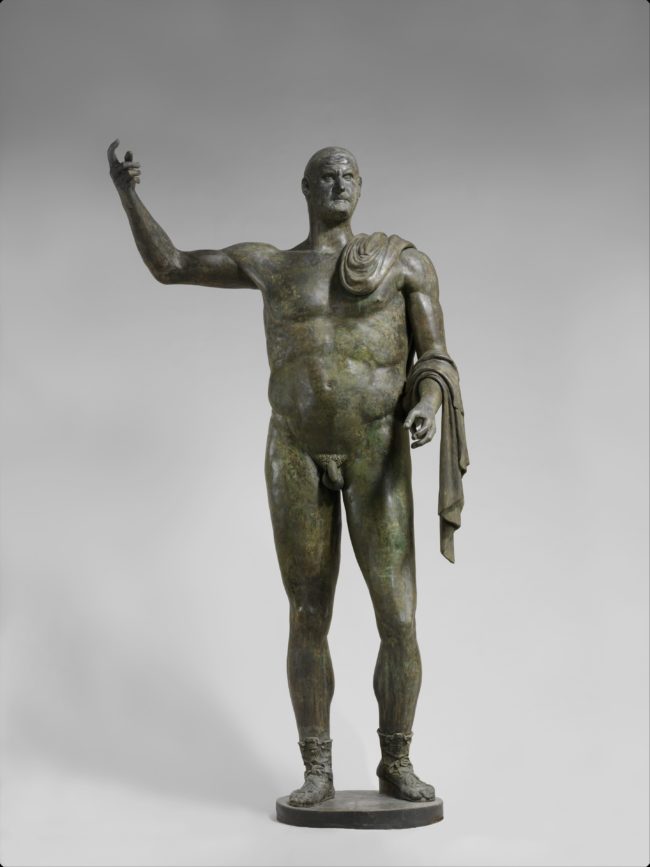 The tensile strength of bronze is exploited in this portrait of the emperor Trebonianus Gallus (251-251 AD): the pose, with arms extended away from the body, presents the ruler in a dynamic way and projects the personality with which he wished to be perceived.

The methods used for casting bronze sculpture were carefully revived during the Renaissance in Europe. The bronze David by Donatello (c. 1386-1466) was probably commissioned by Cosimo de’ Medici between 1420 and 1460. It was the first life-size nude cast since antiquity. Unusually, Donatello chose to present the youthful David: his nakedness accents his vulnerability and the smooth finish of the surface catches the light and stresses the sensual skin-like nature of the material. 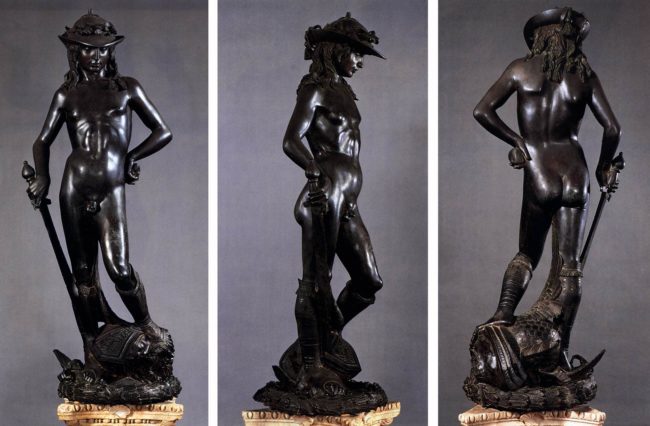 The severed head of Goliath lies underfoot. This part of the sculpture is full of fine detail that Donatello would have created with the help of a chisel. 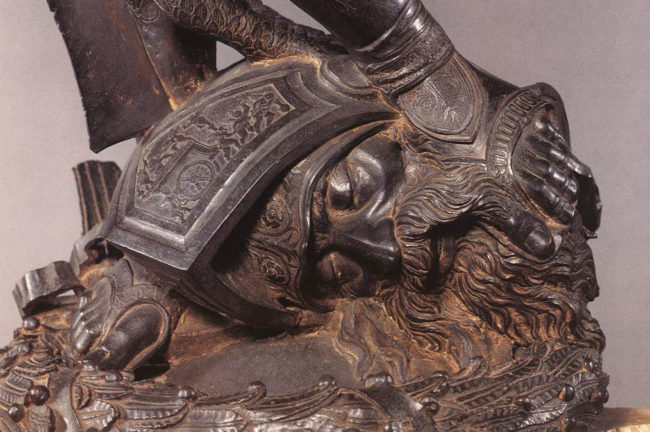 A very different type of bronze body was cast by the Italian Futurist Umberto Boccioni (1882-1916). 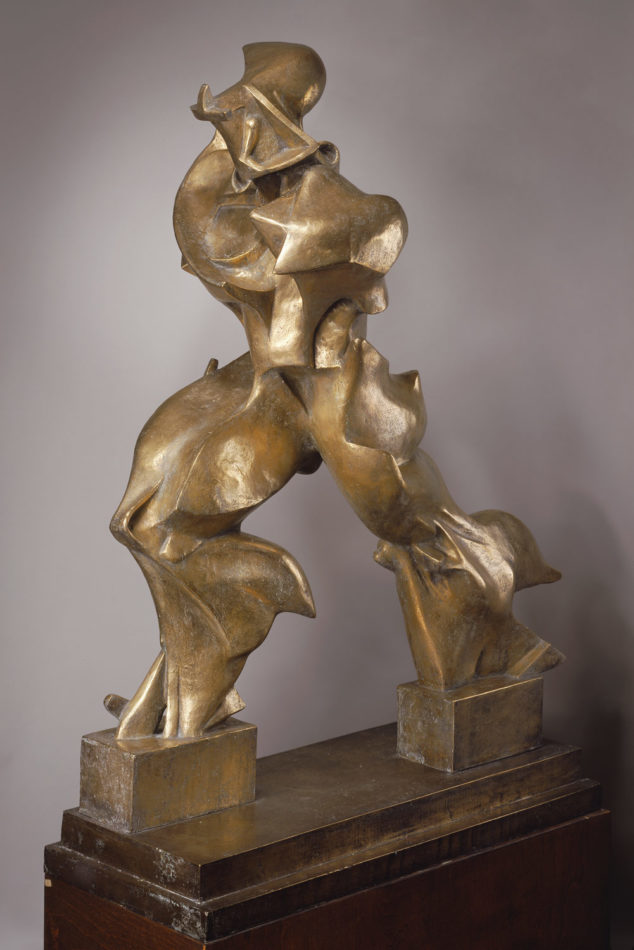 This work – called Unique Forms of Continuity in Space – explores the human figure in motion, boldly striding forwards. The Futurists spurned the traditions of art history and were inspired by technology and mechanical dynamism: this is possibly the most successful realisation of their aesthetic in any medium. The figure explodes into the surrounding space, an effect greatly enhanced by the rigid yet fluid-looking lines and forms and the light-catching surface of the material. 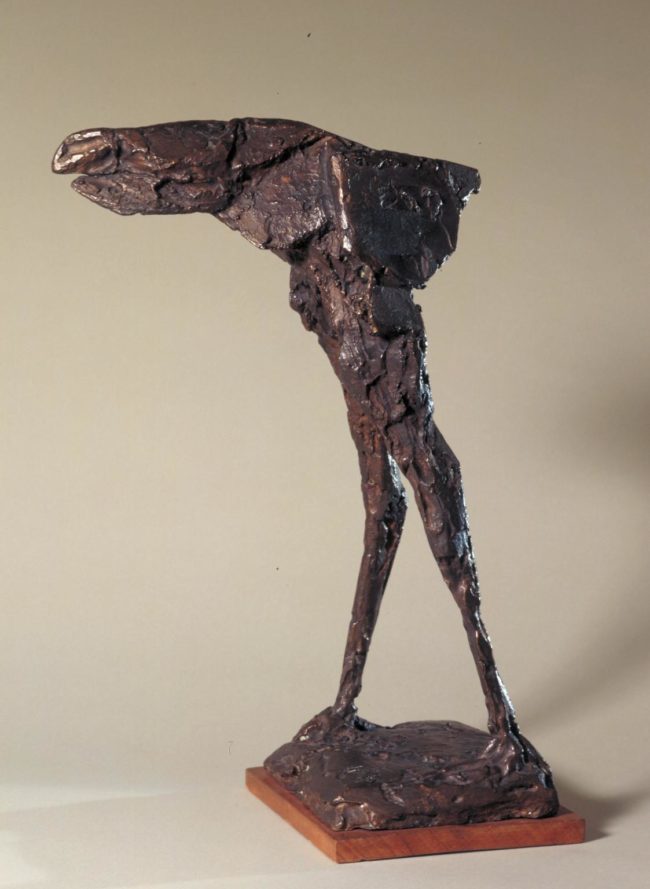 While Boccioni’s treatment of bronze disguises the processes of casting to create an effect of sleek dynamism, the British artist Elizabeth Frink (1930-1993) preferred to reveal her steps and the character of the material in a work like Harbinger Bird (1961). Frink started with a light chickenwire construction before adding wet plaster in layers. Once modelled she carved the form to roughen the surface. Even after the sculpture had been cast in bronze she would attack it with chisels, rasps and mallets to distress it.

This creepy creeping “bird” of disturbed and disturbing surface effect bears the scars of the artist’s hand. The staggering skinny legs are a testament to the tensile strength of the material (its totally top heavy, with that wedge block on top) and the darkness of colour only adds to the menace. The bronze-ness of bronze is brought to life in this bird.