This week we’re looking at terracotta as a medium for art. The word means “baked earth” in Italian because terracotta is clay that’s been exposed to heat. Our first stop-off is Etruria. 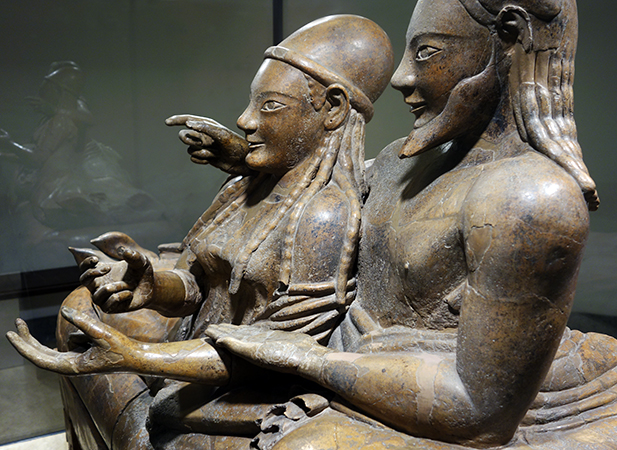 Etruscan art is that produced by the people of Etruria (modern day Tuscany) from the 8th to the 2nd centuries BCE. Before the Romans came and conquered all, Italy was dominated by the Etruscans. Their trading links brought them into contact with many cultures but their art was mainly influenced by the Greeks. The Etruscans were all about the preservation of the body and the afterlife and thank goodness they were because their tombs are the only way we know anything about their culture. 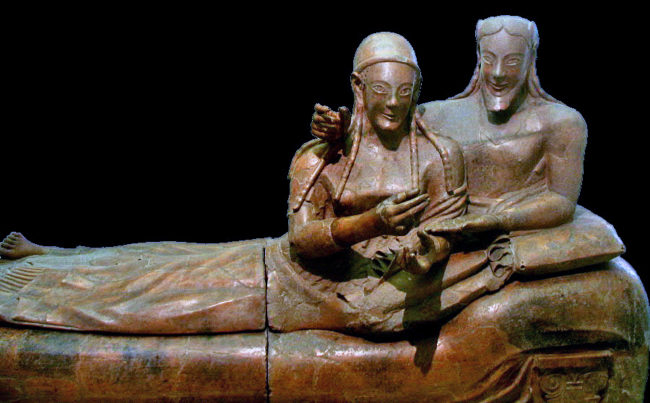 These are two versions of an Etruscan sarcophagus (one is in Paris, the other Rome) showing a married couple. They were found in a necropolis (cemetery) in Cerveteri, a town north of Rome with hundreds of tombs. 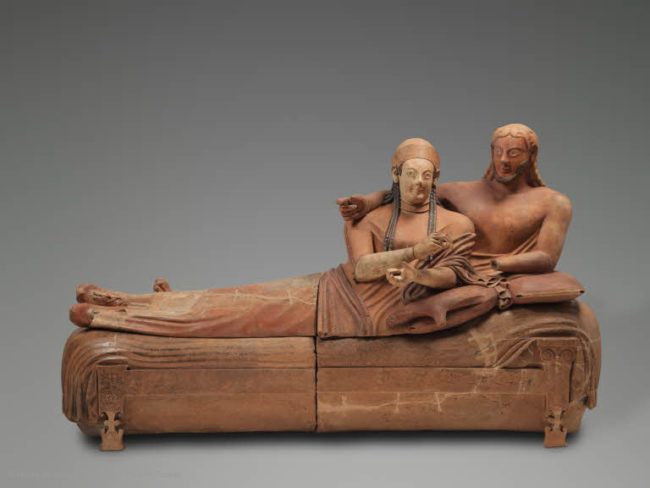 The couple reclines as if at a banquet, quite life-like, moving into our space, extending their arms, embracing, intimate. The sarcophagus tells us about Etruscan women actively participating in public life – attending banquets, riding in carriages and engaging in public events. Here she is possibly anointing his hand with perfume in a traditional funeral ritual. 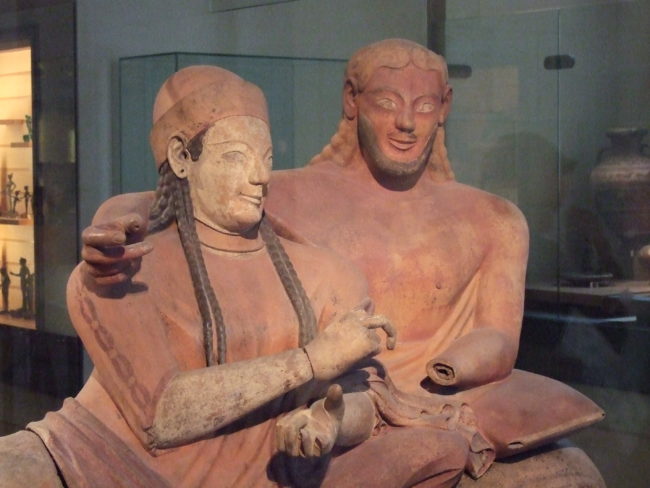 This is a massive piece of terracotta. I can only imagine it’s not easy to model clay figures in nearly life-size. When these forms had been shaped and were beginning to dry (called the “leather hard” stage) they’d have been smoothed before being fired in four pieces. The fired surface is excellently glib for the application of paint.

Over in Renaissance Florence terracotta pieces rumbled easily off Luca della Robbia’s (1400-82) art assembly line. An important figure in the early Renaissance, della Robbia created works in the “sweet style” and used classical Greek and Roman models. His big technical innovation was the use of glazed terracotta for sculptures. 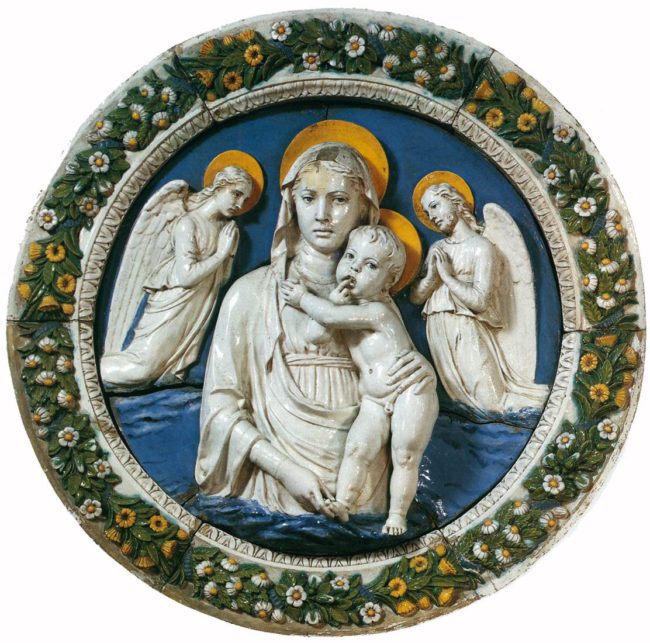 Roundels of gently expressive, half-length Madonna groups in coloured glazed terracotta on a blue background were the bread and butter of Luca’s workshop. Adding colour made statuary much more visible in the dim lighting of a church and bright and permanent colours also made the terracottas suitable for use on the outside of buildings. Della Robbia’s family carried on his factory well into the 16th century. 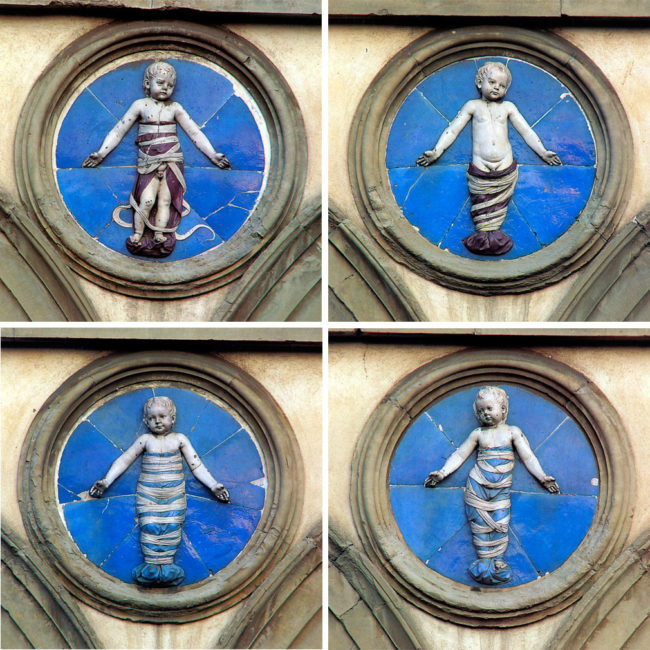 Terracotta was used by Niccolò dell’Arca (c. 1435 – 1494) to depict the Lamentation over the Dead Christ for a church in Bologna (1464 or c. 1485). Northern Italy was responsive to influences from the religious currents of northern Europe and this tableaux vivant gives rise and swell to incredible emotion. 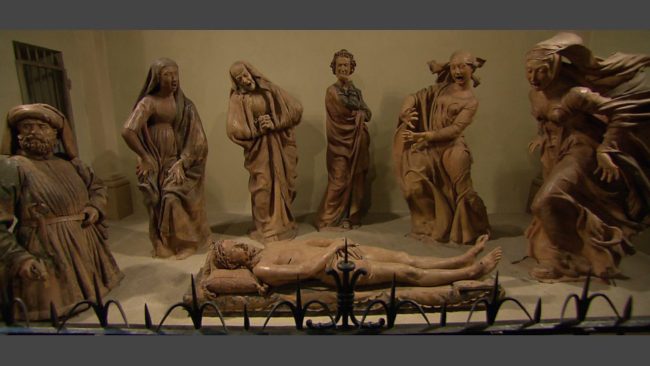 The 7 figure group is painted and must have made a startling impact inside the church. Around Christ are a stick-thin John the Evangelist, a startled donor and the holy women. The Virgin Mary is uttering an anguished shriek with bowed head while one woman hurls herself forward, screaming in despair and another recoils in terror. 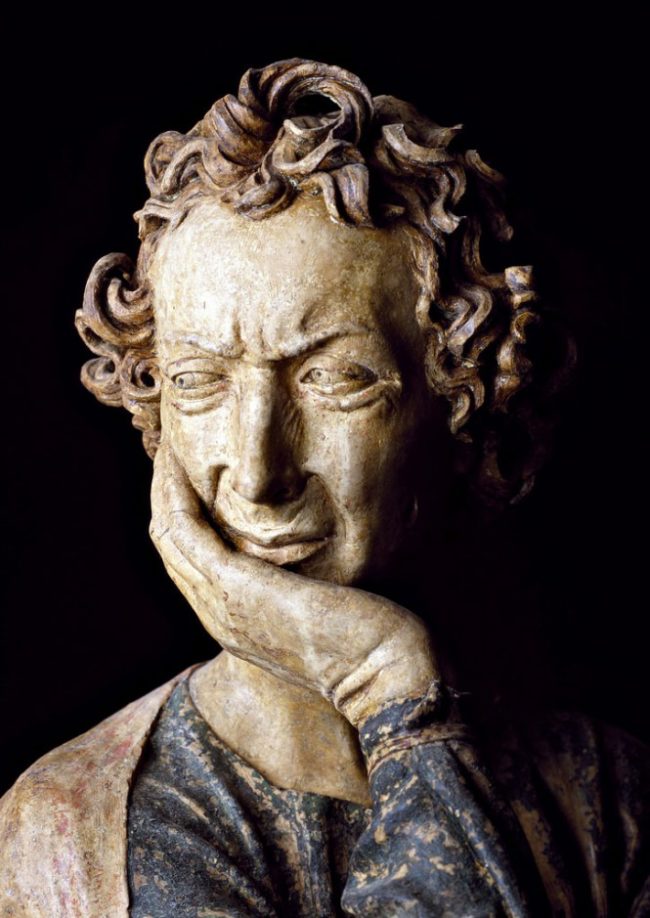 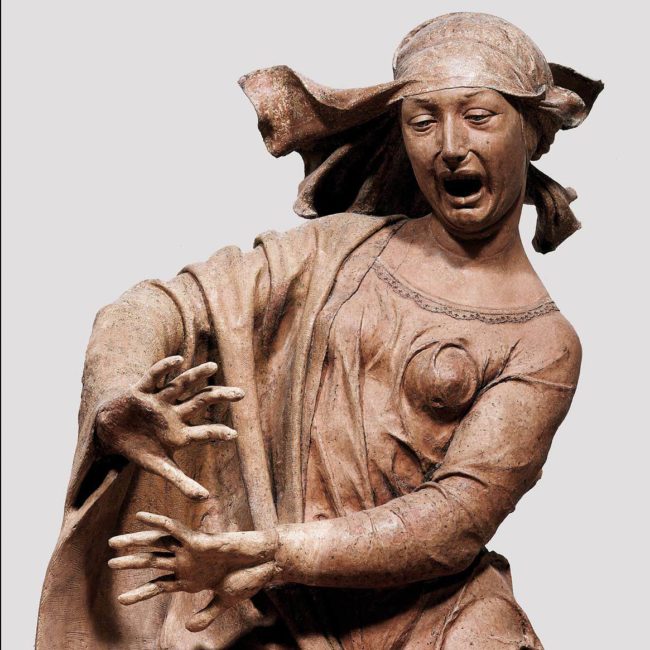 Terracotta sculpture allows for experimentation: since it is a somewhat slow-drying material the artist can fiddle around with forms and effects. The figure on the right looks like she’s standing in front of a turbo fan: the artist has transformed heavy earth into wind-whipped garments. Breathtaking. The detail on the face of the Evangelist – the way his mouth is pulled into a nearly-sob – makes his pain so palpable. 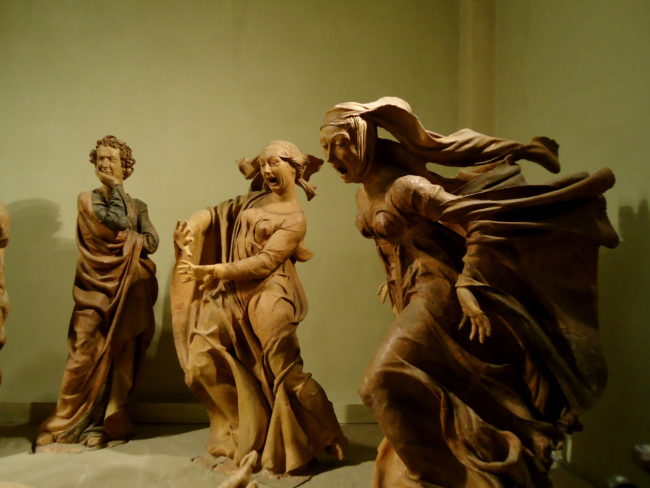 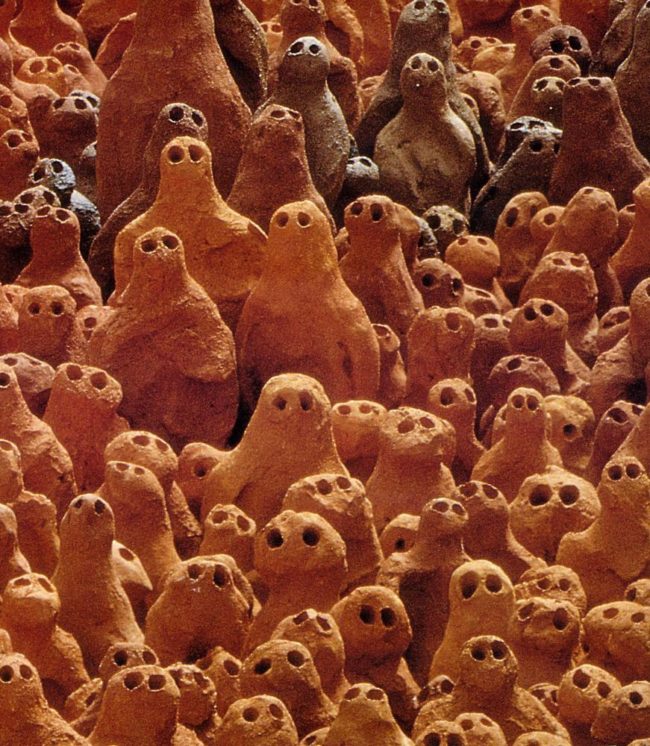 The British artist Antony Gormley brought terracotta bang up to date with his unforgettable work Field from 1991 (it’s been re-installed at various locations since). It’s made up of about 35,000 (yes) tiny terracotta figures each between 8 and 26 cm high, installed on the floor of a room facing the viewer. The figures were sculpted in Mexico by 60 members of a family of brick-makers, under the supervision of the artist. I just love this dark red horde of funny little figures casually encroaching and carpeting the space. They’re a little bit cute and crafty, a little bit mad and menacing. 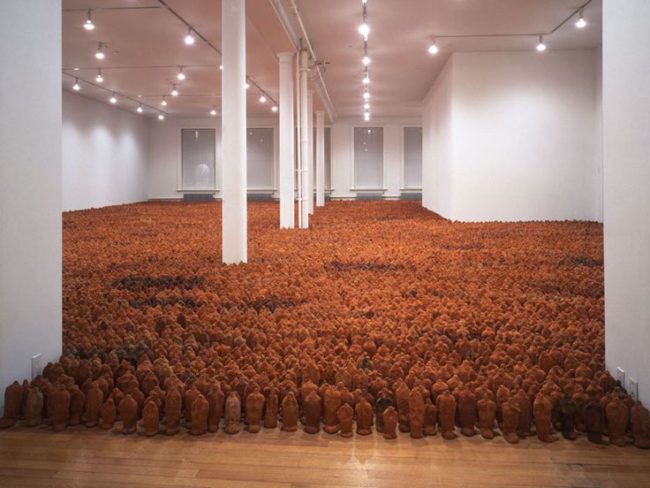 In 2012 British/Japanese artist Simon Fujiwara also tapped into the idea of a terracotta army with his work Rebekkah, one hundred, terra-cotta dyed, life sized, cast plaster female figures. The installation was inspired by a 16 year old girl from Hackney, who was one of the protagonists of the 2011 London Riots. Fujiwara asked Rebekkah to travel to China to take part in a social experiment; her access to social media was cut and she visited factories making things we wanted but took for granted (fashion, tech, etc.) The trip ended with a visit to the Terracotta Army (the vast collection of sculptures depicting the armies of the first Emperor of China, designed to protect him in the afterlife and dating from 210–209 BCE). Rebekkah then had casts made of her body to be assembled into modern day versions of the warriors. Up to 100 figures were created, making Rebekkah a representative of a new breed of British-born warrior and a soldier for social change. 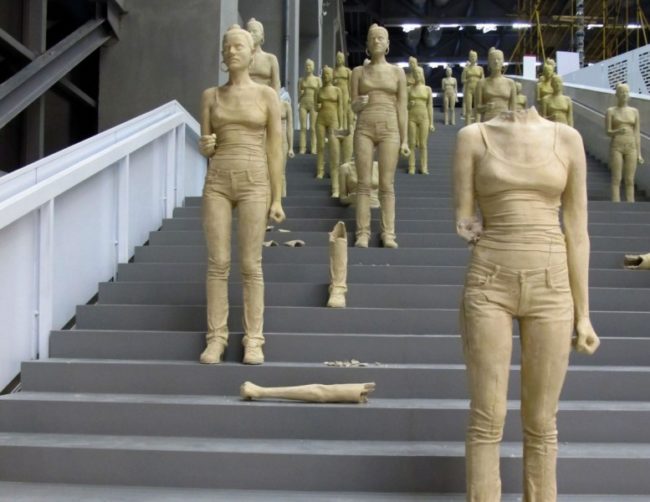