Last time we looked at linear perspective as an important way painters and sculptors can create a believable sense of space in a picture or carving. Linear perspective uses a mathematical system of lines to set up a realistic window onto the world. The key observation for this system (and you’ll no doubt remember drawing a tree-lined road or train tracks in art class) is that lines that are actually parallel appear to converge on a central vanishing point. 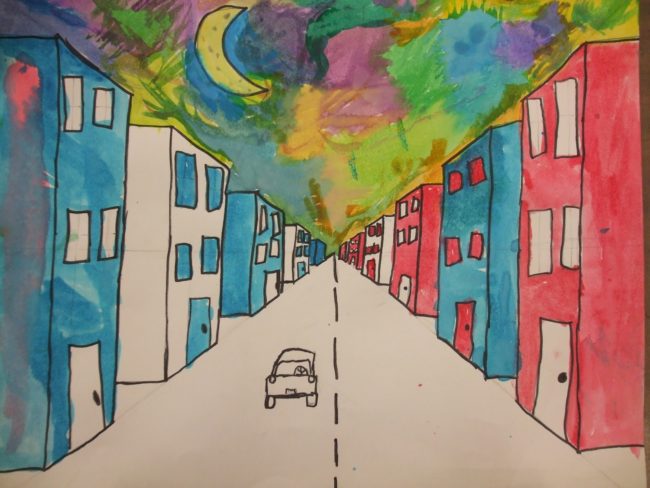 Once “invented” and absorbed, artists became sophisticated in their use of this system. Here’s the Dutch Golden Age genre painter Pieter de Hooch punching hole after hole into the surface of his canvas with a rigorously worked-out series of receding interior spaces. The lines on the floor and the blast of light on the distant canal make us take note of the spatial illusion. 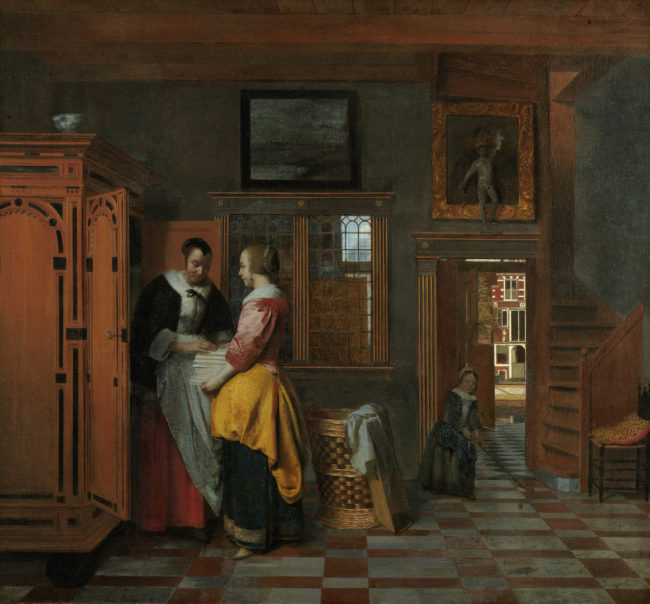 There are other ways though of creating a sense of depth in a painting and it’s one of those we’ll look at today. Aerial perspective (sometimes called atmospheric perspective) uses colour to create a sense of space. It mimics the natural way atmosphere affects the human eye, so that things in the distance appear paler, bluer and fuzzier than things in the foreground. Here’s a classic bit of aerial perspective from the Romantic painter Caspar David Friedrich: 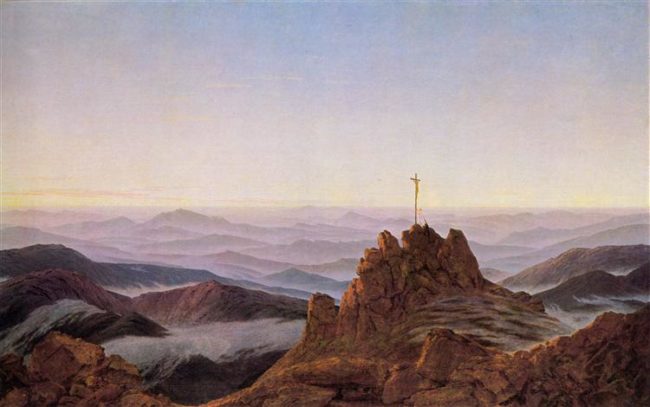 As is clear here aerial perspective comes into its own in landscapes. These hills and mountains of Riesengebirge become bluer in the middle distance and paler in the background. Outlines become less precise and details are lost in the distance.

The effects of atmosphere on the human eye had been observed by fresco painters of the Roman period and aerial perspective was used in paintings from the Netherlands in the 15th century. Explanations of its effects were written by polymaths such as Leon Battista Alberti (1404-72) and Leonardo da Vinci (1452-1519). Here is the big man Leo himself putting the technique to delicious use his Virgin and Child with St. Anne c. 1508: 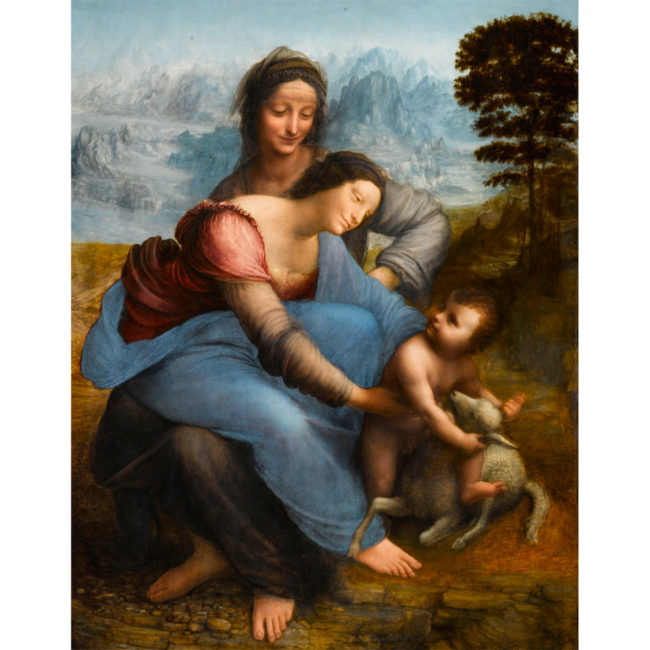 Leonardo builds a beautiful blue imaginary landscape way beyond his figures. The tones get paler as they recede. See too how the background colours are “cool” whilst those in the foreground are “warm”. Colours are sometimes described (and often used by painters) in terms of temperature. Warm are those in the red-orange-yellow range. Cool are those on the opposite side of the colour wheel: we’re talking the green-blue-violet zone. 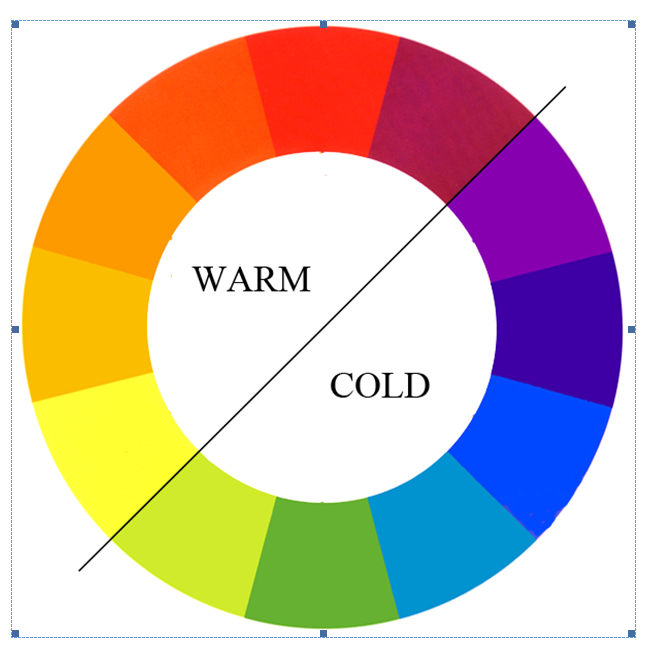 It’s the chilled blues in the background in contrast to the orange-ochre stones in the foreground of the Leonardo that build the room into which his forms and figures can fit. In this watercolour from 1842 English Romanticist painter Turner also exploits the push and pull of warm and cool colours. In this painting (called Lake Constance), the warm colours seem to advance towards the viewer, while the hazy blues recede towards the horizon. 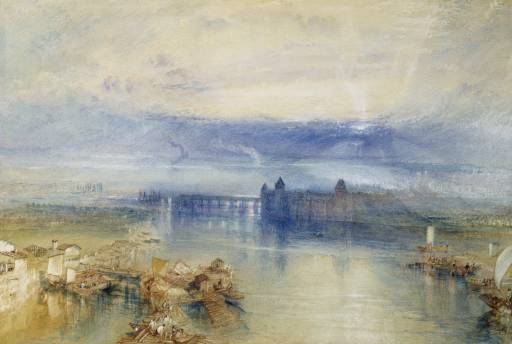 As well as using colour to convince us of recession, Leonardo, Turner et al do the blurring to trick our eye into believing that things are far away. The edges of far-off rocks are smudged and softened and details disappear into thin air. This fudging of fine detail is something we see Ma Yuan of the Song Dynasty (960-1279) do in Willows and Distant Mountains. This painter can’t use colour to suggest recession so it’s all about making the foreground really crisp and dark and the craggy outline in the background faint and vaporous. 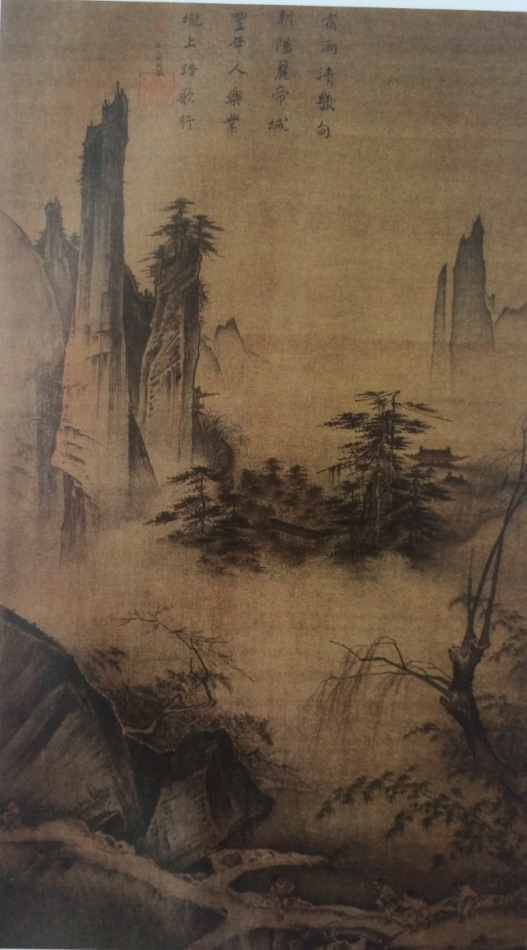 I’ll sign off with something that rejects aerial perspective to pinpoint how significant this subtle spatial technique is. In Toward Evening German expressionist Gabriele Münter (1877-1962) creates areas of intense colour. From the red road in the foreground to the blue mountain in the background there is no lightening, no let up. She’d been looking at colour-rich glass painting when she made this and wasn’t after a sense of depth through colour. Though her mountain is blue it isn’t pale or blurred so the end effect is more flat pattern than far-off panorama. 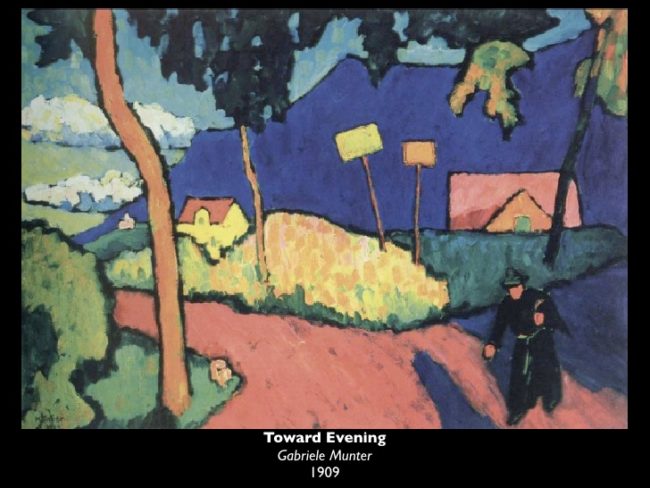