Animals have long been part of the art story. They’ve been portrayed in religious rituals, as mythical creatures, incarnations of gods and goddesses, symbolically in Christian art or simply as pets. Some of the earliest images known are of animals brushed into being on the walls of caves more than 40,000 years ago. These two bison are rubbing haunches, but they may have been painted hundreds of years apart. We’re still not sure why prehistoric people covered cave walls with animal paintings. 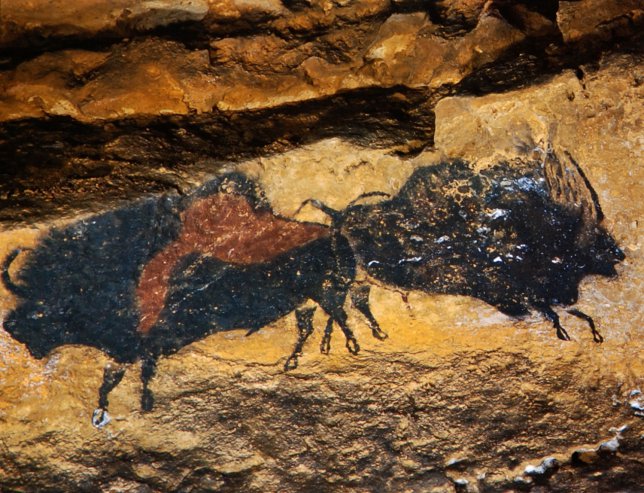 This c. 1300 scene painted with ink and colour on silk and attributed to Liu Kuan-tao shows Kublai Khan, founder of the Mongol dynasty in China and his followers spotting their prey. The suspense is heightened by the fact that – cleverly – the prey is not revealed to the viewer. 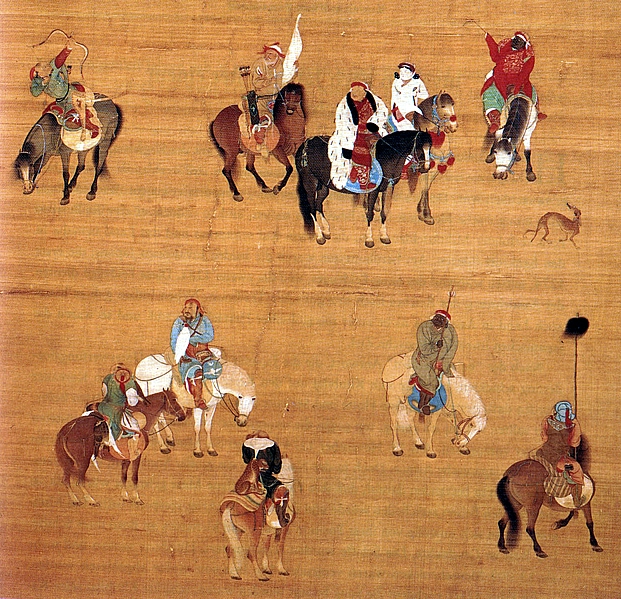 Albrecht Dürer (1471 – 1528) was the preeminent master of the German Renaissance. He was inspired to make this 1515 woodcut after receiving a letter from a friend describing an Indian rhino. Dürer had never seen an animal like it and took his friend’s phrase “armour-plated” literally. Despite its inaccuracies, Dürer’s woodcut was well-known and popular in Europe, copied many times in the following three centuries. The spirit of the beast is spot-on. 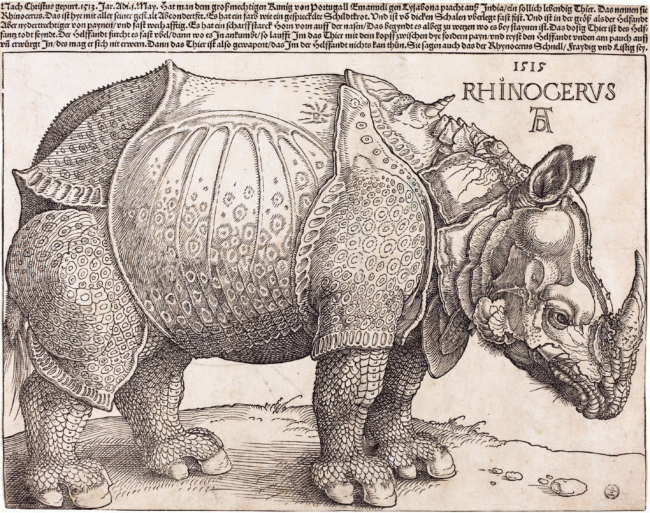 Animals began to take centre stage in the 18th and 19th centuries as proud owners commissioned portraits of their well-bred livestock and pets. Some painters like George Stubbs (1724 – 1806) made a living specialising in racing scenes and horses. Whistlejacket (c. 1762), a thoroughbred product of recent knowledge on breeding, takes centre stage, near-enough life-size. Stubbs’s huge picture was painted for the 2nd Marquess of Rockingham, Whistlejacket’s owner and a patron of Stubbs. The neutral background isolates, celebrates and showcases the animal in a whole new way. 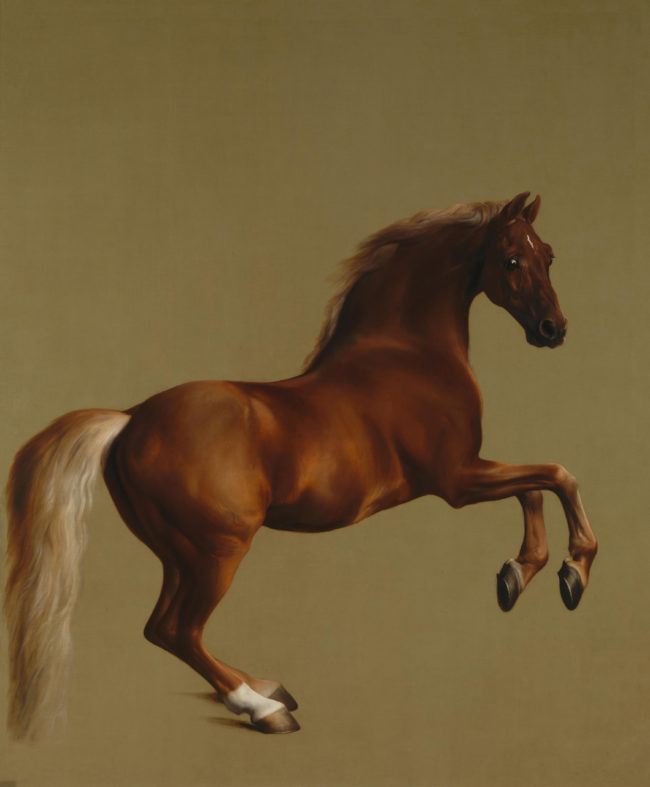 The French Romantic painter Eugène Delacroix painted his horses with a wild vitality: flicking brushstrokes capture the animal’s fear and agony in the face of certain death in this pen and ink and watercolour work from 1826. For romantic painters like Delacroix, the energy and violence of such an attack – expressed with savage strokes to the horse’s mane and the inky shadows in the background – was a physical expression of the intense emotions Delacroix sought to bring to life on canvas. 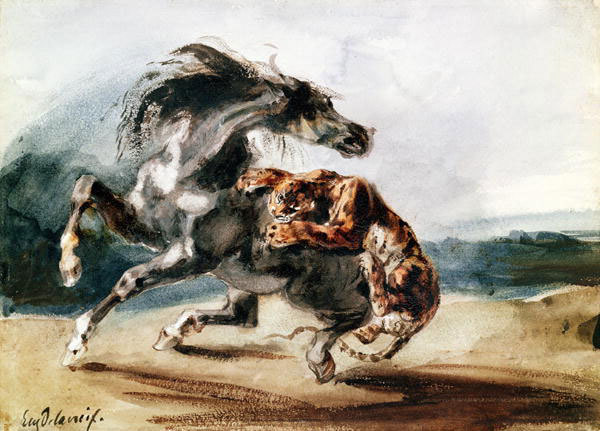 Edwin Landseer (1802 – 1873) appealed to the Victorians for his sentimental humanising of animal subjects. His Monarch of the Glen (1851) is one of Scotland’s most recognised and reproduced paintings to the point that it had become a cliché by the mid-20th century. The Sunday Herald called it “the ultimate biscuit tin image of Scotland: a bulky stag set against the violet hills and watery skies of an isolated wilderness.” Still, it has sentimental appeal and is an icon: late last year drinks giant Diageo had planned to put the painting up for auction, expecting to fetch £8m. The company has now gifted half the value of the piece to National Galleries of Scotland in the hope it can raise the remaining £4m to put it in public hands for the first time. 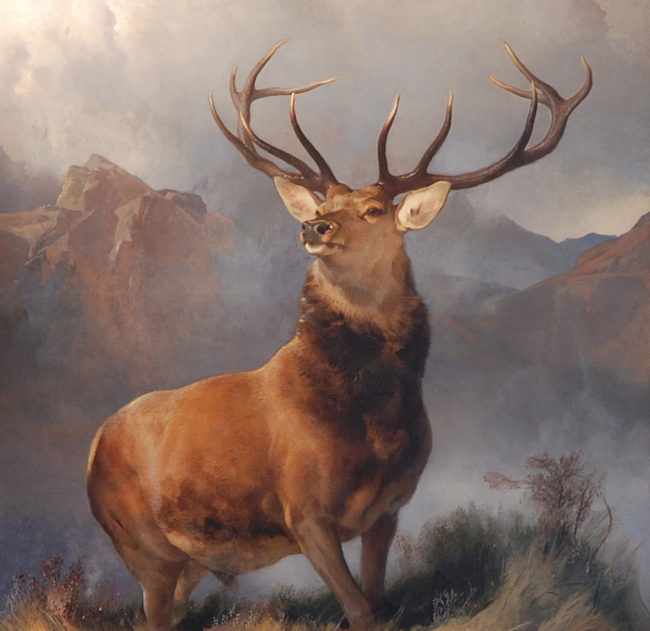 The German Expressionist painter Franz Marc considered animals to be on a higher plane. “People with their lack of piety, especially men, never touched my true feelings,” he wrote in 1915, “… but animals with their virginal sense of life awakened all that was good in me.” Animals were the way that Marc expressed his spiritual ideals. Here in Little Yellow Horses from 1912, he uses simplified shapes and symbolic colour to express the animalness of his subject. In his personal system of colour symbolism yellow, a “gentle, cheerful and sensual” colour, symbolised femininity and joy. 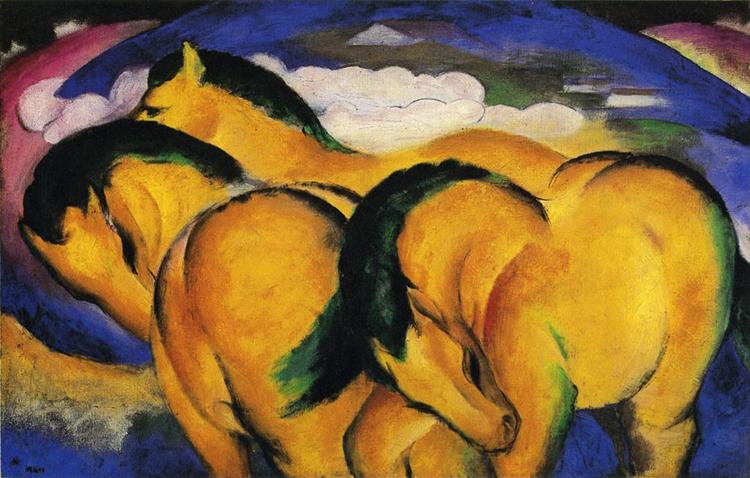 Today, animal art is as popular as ever, even down to installations that put a contemporary spin on taxidermy. Damien Hirst’s most famous work The Physical Impossibility of Death in the Mind of Someone Living (1991) famously floated a 13 foot tiger shark in a tank of formaldehyde. His controversial and memorable study in death and display is surely one of our most recognisable art works. 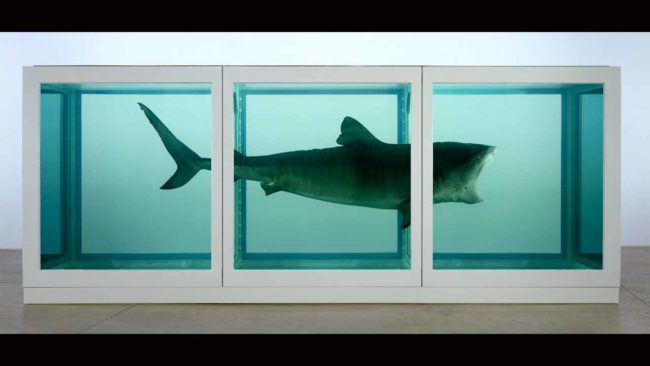 I love Joe’s Black Dog by the contemporary American artist Marjorie Weiss. In this acrylic on canvas painting a giant dog dwarfs the landscape. Our low viewpoint makes the animal seem even larger. The clean, sinuous silhouette and raised hind leg fills the animal with energy and potential. We are left wondering: what has it spotted just out of the picture frame? Pure, perfect animal. 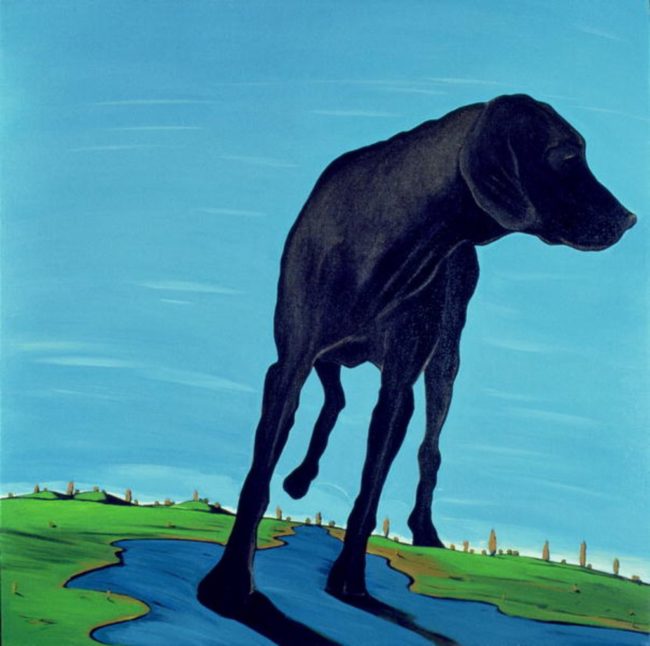