Still-life – the painting of ordinary objects without any human presence – was long regarded in the Western world as a lowly art form on the grounds that it required only technical skill, not imagination. André Félibien, 17th century French chronicler of the arts and official court historian to Louis XIV of France, established the so-called hierarchy of genres in 1669, ranking paintings according to a system of importance and value. He placed History painting (including historical, religious and mythological scenes) at the top, followed by Portraiture, Genre and Landscape. Still-life came in last, at the very bottom of the painting pile. In spite of this, the painting of ordinary objects without any human presence has persevered through the years. 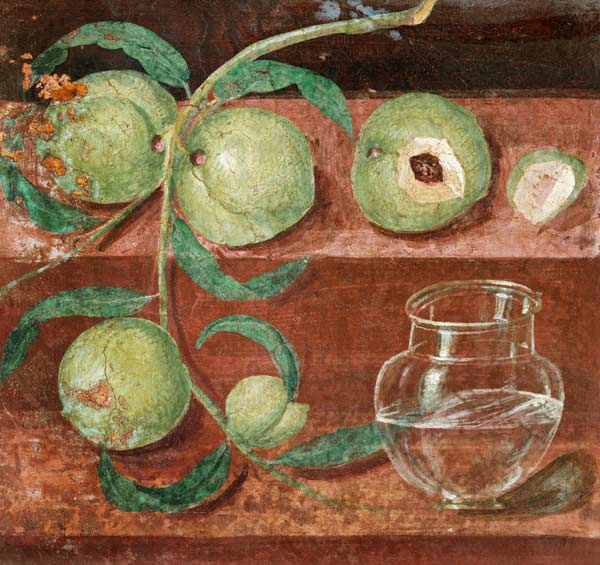 Though, if you see a snippet of a Roman fresco featuring fruit and other objects arranged in the manner of a still-life, then this would most likely have formed part of a larger painting. In this mural from Herculaneum c.50 BCE we see the sheen on a water vessel and some not-quite-ripe peaches. In the 17th century the still-life genre was often associated with themes of transience, decay and the vanity of earthly things. In this 1641 painting by the German still-life specialist Sebastien Stoskopff, a skull is included as a sign of death or memento mori. 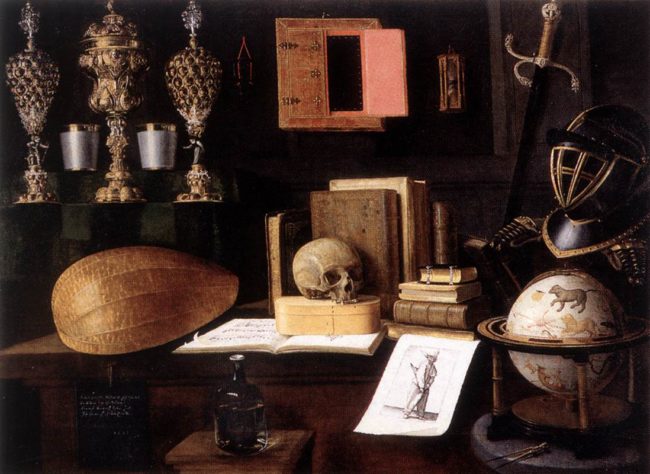 Fruit is a popular subject, possibly symbolising fertility or plenty or simply posing a juicy challenge to paint. Here the Spanish artist Francisco de Zurbarán (1598-1664) produces a masterly study, bringing lemons into skin-dimpled life through careful observation and excellent technique. Slow-drying oil paint gives the painter lots of time to perfect textural detail: the glossy wicker weave versus the fuzzy bums of the peaches for instance.

The composition of this painting – called Old Models (1892) – by the American still-life painter William Michael Harnett evokes a feeling of refinement through leisure activities, especially music and reading. One useful thing about not having any living/ moving parts to contend with is that the artist can spend considerable time getting his arrangement just so. 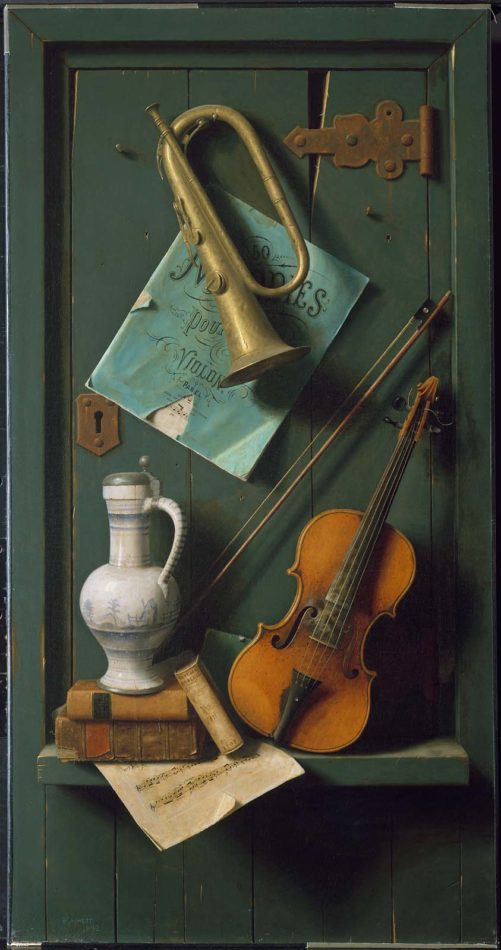 In this intense image Dutch Post-Impressionist painter Vincent van Gogh depicts Two Cut Sunflowers (1887), one of the artist’s most enduring subjects. He’s able to bring about a palpable atmosphere: the driving parallel and cross-hatched brushstrokes and use of a limited earthy palette gives this a definite mood. 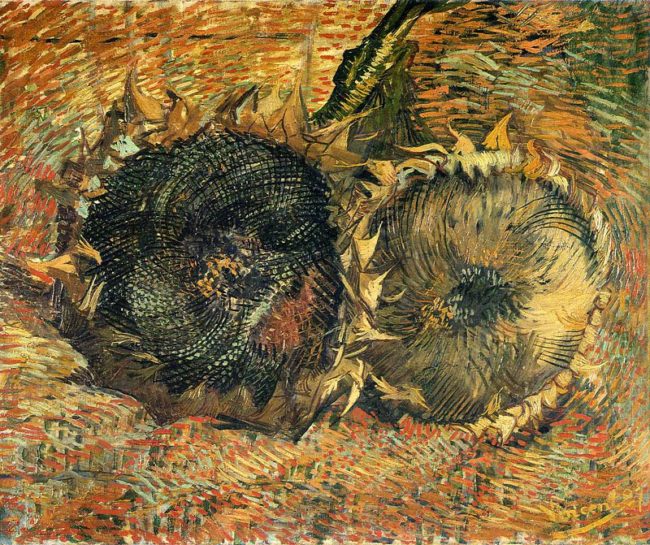 By early 20th century Felibien’s hierarchy had lost its significance and already from the late 19th century onwards the neutrality of the still-life genre was making it a powerful vehicle for artists engaged with issues of pure form. One such artist was Paul Cézanne who used exploratory brushstrokes and planes of colour to build up form. He also played around with multi-viewpoint perspective as in this still-life of a basket of overflowing fruit arranged on a table with white cloth and three different pots (1888-90). 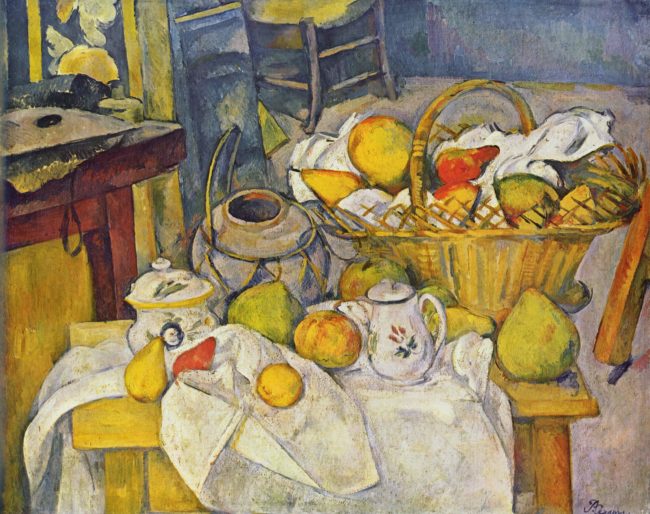 Cézanne is said to have formed the bridge between late 19th century Impressionism and the early 20th century’s new line of artistic enquiry, Cubism (both Matisse and Picasso are said to have remarked that Cézanne “is the father of us all”). The Cubist painter Georges Braque leaned heavily on Cézanne when he was working out his new style. In this later work, The Round Table (1929), that Cubist style is still evident but has been softened by Braque’s subtle use of colour. 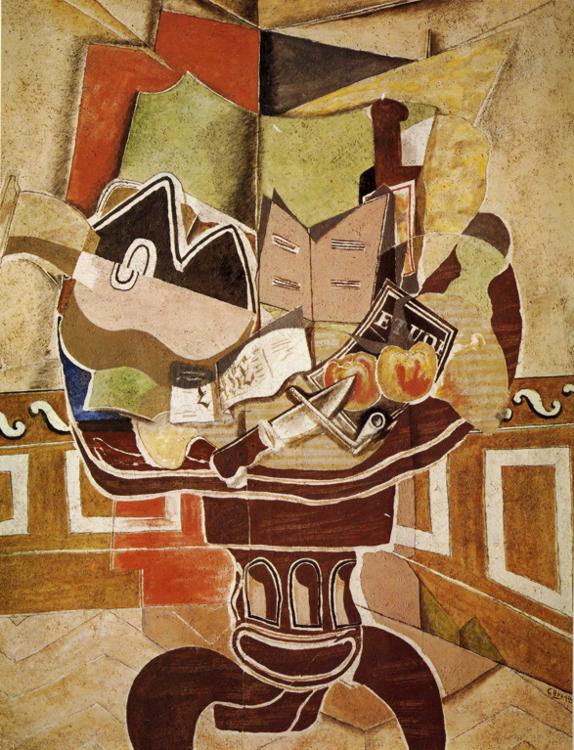 For a more modern take on the still-life genre look no further than Daniel Spoerri (born 1930), a Swiss artist and writer born in Romania. He is best known for his “snare-pictures,” a type of assemblage or object art, in which he captures a group of objects, such as the remains of meals eaten by individuals, including the plates, silverware and glasses, all of which are fixed to the table or board, which is then displayed on a wall. In this work Prose Poems (1960) the intention might be to “snare” a moment in time. 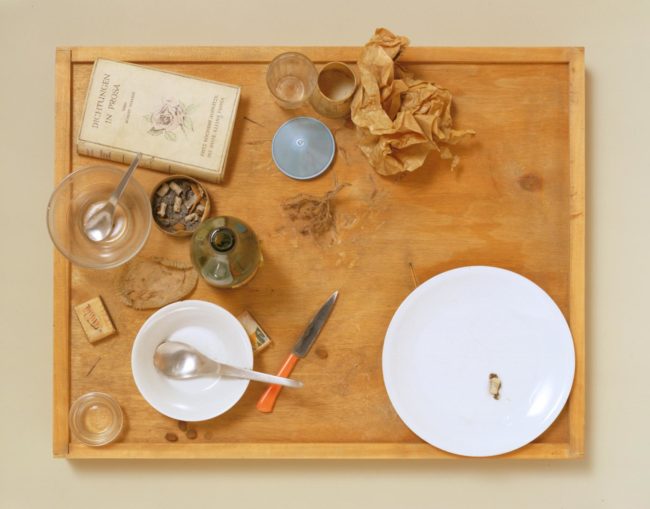 And I love Tony Cragg’s New Stones – Newton’s Tones from 1978 for which he collected fragments of discarded plastic in a few hours in May 1978 in the area where he lived in Wuppertal, Germany before arranging them according to Isaac Newton’s spectrum of colour. Possibly Cragg uses found materials to comment on modern technology and urban waste. Cragg’s materials also show that discarded objects have beauty: from a distance this work seems to shimmer and dematerialise like a rainbow. 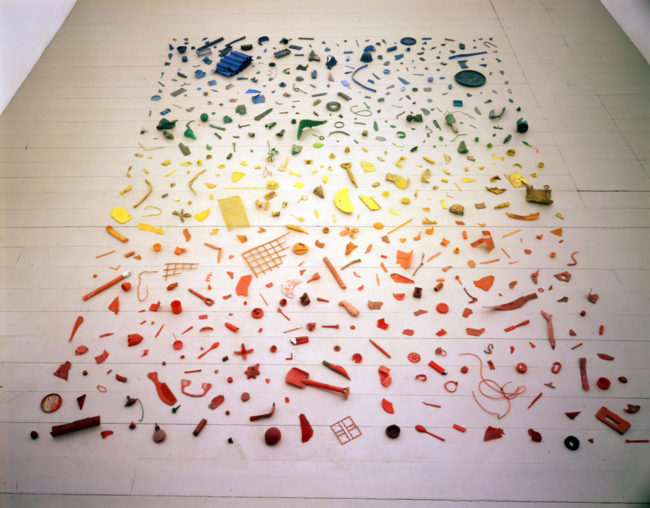